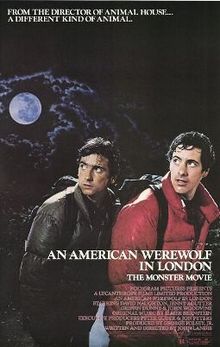 i don’t like movies with ghosts. or dead people who rise up and start speaking. after wendy’s death and my ongoing relationship with her and other Spirits, i find it extremely disrespectful to frighten people with such images. it is because of these types of movies that when i mention Spirits and Angels, people get supremely freaked out. Spirits and Angels are loving beings of light and joy that surround us to help us live our lives better! they are not to be feared! i had an epiphany while watching one of those vicious japanese horror movies when i decided that from that moment onwards, i would watch no more ghost movies. out of respect for the Spirits and Angels known and unknown to me. those movies make even me frightened, and i will not be frightened by my own friends.

all of this said, i love scary movies. but now i am limited to vampires, werewolves, aliens, and serial killers. anything without ghosts. ‘an american werewolf in london’ was a movie i always loved. it is scary, funny, irreverent, and most notably, heartbreaking. the last time i saw it was before wendy’s death and tonight i watched it again with my mother. it fucking freaked me out. mainly because the mutilated corpse of the main character’s best friend speaks to him, morbidly, from beyond the grave. i almost stopped watching, this really scared me and i began to wonder how i would sleep tonight. but i kept watching. this film is one particular example of how ghosts, or Spirits as i prefer to call them, are used in an effective manner. the main character needed to be frightened into making a decision that would save other lives. he was unable to make that decision, but thankfully others made it for him. without those Spirits, well, i think the story would have ended with far more bloodshed. but i am still frightened.

my familiar, cubby, passed away last year and i always felt safe with her around me. my steven is in spain, i won’t see him for five days. so here i am, 330 in the morning, writing to stave off my fear. and then i begin thinking about what exactly it is i am afraid of. it is not death. it is actually only fear. is this trauma related? i am feeling very jumpy. i don’t like having my back to the living room. there are sounds around the house. i don’t like this.

as much as i like horror movies for some morbid reason, they are not good for me. i think i must not watch scary movies that have ghosts, whether they serve a good function or not. whether their presence is gratuitous or necessary. i think this is the bottom line. i am sensitive enough, i don’t need it to be heightened by fear. this is productive for no one, let alone myself, who needs to sleep like everyone else. maybe i need not watch scary movies in general. maybe i have been through enough horror there is no need to go down those dark roads anymore.

yes, this is the solution. no more scary movies for me will be my new year’s resolution from this moment onwards.

let’s see how long i can keep it up.