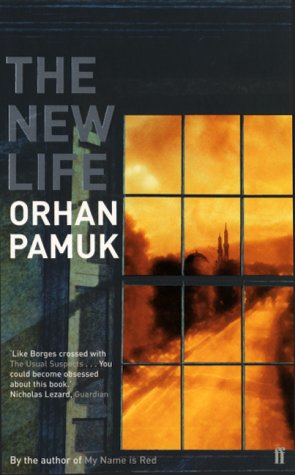 A man hissed at me today, but not because of what you may imagine. He hissed at me because I had a copy of Orhan Pamuk’s novel The New Life in my hand. Mr. Pamuk is this year’s Nobel Laureate for Literature and hails from my hometown of the moment, Istanbul. He is both loved and hated in Turkey. Loved because he is considered to be one of Europe’s best and most evocative writers, whose topics centre around Turkey’s role as a bridge between the East and the West. Hated because he is guilty of ‘insulting Turkishness,’ something that is against the law here and one of the reasons the EU membership of Turkey is suddenly on the rocks. I imagine it is the latter reason that was responsible for the angry hissing.

I held Mr. Pamuk’s novel in my hands with a strange sensation of elation and fear. Elation that a mere novel could provoke such a response, all Hail the power of words!, but fear for the same reasons. Many Turks claim that Mr. Pamuk is ‘a filthy liar’ and that his books should be burned. How could I not want to read them?!? In fact, I wasn’t that interested until I heard first hand of the controversies surrounding his work. I just love a good controversy, so I do. I could feel energy emanating from the book and while part of me wanted to hide my purchase from the other bookshoppers lest I get hissed at again or worse, another part wanted to raise it above my head and shout ‘LOOK! LOOK! ORHAN PAMUK! VIVA LA REVOLUCION’ followed by an Indian war cry. Wow, what a feeling. I feel strangely exhausted by the ten minute encounter.

Look what I found inside:

“I read a book one day and my whole life was changed. Even on the first page I was so affected by the book’s intensity I felt my body sever itself and pull away from the chair where I sat reading the book that lay before me on the table. But even though I felt my body dissociating, my entire being remained so concertedly at the table that the book worked its influence not only on my soul but on every aspect of my identity.”

This is the real Turkish Delight and I cannot wait to gorge.