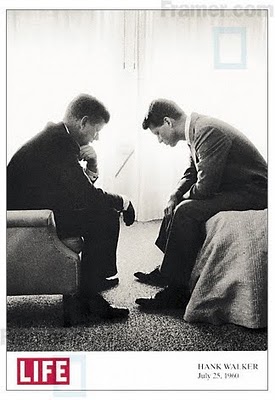 Ever since I was a little girl I have had this thing for the Kennedy’s. My mother had these line drawings of Martin Luther King Jr. and Bobby Kennedy hung in a special place all my life, and I remember when I was small I would stare at the photos and ask my mom about the two men. A reverence would enter into her voice as she told me they were men who brought hope back to America during times of great violence and pain. Even my father, who is not a visibly emotional man, would develop a little quiver in his voice when speaking of them. I can see how I would develop a fascination bordering on obsession with the 1960s having been born to hippie parents.

Yesterday I realised that my thing for the Kennedy’s goes far deeper than hippie parents. Emilio Estevez’s new movie Bobby was the topic of Larry King Live and I found myself riveted. In the moment when they began to show footage of Bobby Kennedy from 1968, I began to weep. When they showed his assassination, I was inconsolable. Oddly enough, this reaction is not uncommon to people in my parent’s generation who wept for all the hope that was lost in Bobby’s death. But for a 27 year old woman, who was not alive in the 60’s to be weeping for a man she has only read about and harboured a fascination for over the years, it was eerie. I was covered in goosebumps with the strangest sensation like I had been there in those times and that was why I was so upset. I had been there with all of them during those years of hope and destruction, I had felt first hand the power of the Kennedy brother’s words of peace and inspiration. Part of my heart died with them even before my body went too. I even feel like I even knew my mom back then because our relationship, even since I was a little girl, always felt like one of equals and friends, not so much a mother-daughter thing as it is between my sisters and her. It was eerie, indeed, to feel so many things at once overwhelm me from a past I could not feel so deeply for, but at the same time I had a sense of recognition. I made just a little bit more sense.

I am a believer in many things, and past lives have always been high on my list because of my own memories, and stories I’ve heard from others. I have figured out some of the past lives that are important for me to know in order to help me through this one and I always suspected I was in the 60s. But I never felt it so strongly as I did yesterday, weeping for Bobby Kennedy and his unfinished life, mourning for all the hope that he took with him. We have seen no leaders like he or his brother, so loved on a global scale with the power not just to make changes and lead, but to inspire, to wake people up, to shake them out of their sleepy dazes and look towards a brighter future. Nay, not look towards it, create that future. Work together to build that future. That was the dream they brought. What a waste.

I used to believe that everything happens for a reason, but I don’t think so anymore. Many things happen for a reason, but we have choice and we as human beings make decisions. The Creator did not want for Bobby Kennedy to die, or his brother, or all those that died during that same era in Pine Ridge during the government sponsored assassinations. The Creator does not want for Leonard Peltier to be in prison. Wendy was not meant to die. The Creator does have a plan, yes, but we must be in tune with it and follow the signs. If we don’t, we stray from the plan and maybe that is why the world is such a mess right now. No one listens to the signs, no one is following their path, everyone is too busy shopping for things and power. We make choices. Choices that flow with the Creator or choices that flow against the Divine. We have so much potential in our hands and it just washes away.

As I write this I feel tears of rage welling up and this rising in my blood that tells me to FIGHT FIGHT. That there are those fighting the righteous fight and I should be looking for them, I should be at war with them too. But then I remember the words of a very wise woman who told me that this is my life to rest. I have been a fighter, a fearless warrior in so many of my lives, and I feel that warrior spirit calling me indeed. She told me that it is allright to take a break in this life, that I can stop for just one life and rest. The fight will always continue and I will be back to it, but for now let it go. Each day that goes by and the deeper I enter into self-reflection I feel she is right. Is it a coincidence that I ended up working with indigenous peoples? That my journey took me to Pine Ridge, where I felt a sensation of home like I have never felt anywhere else in my life and have not felt since? My weeping at Bobby Kennedy’s murder like an aged hippie thinking back on old times? These are the signs telling me I have been walking upon my old footsteps, searching for home on the battlefield. But the battlefield is not my home for the moment, nor is it meant to be.

I have a new battlefield inside and it is to overcome the pain that all these centuries of fighting have left in me. The pain that overflows when I hear Bobby Kennedy’s voice, when I think about Wounded Knee, Vietnam. Something is telling me that it is time to stop looking for my way into the battles on the ground I want to be a part of, Darfur, The Congo, the struggle of indigenous peoples. AE voice deep inside is telling me I am just where I am supposed to be, doing just as the Creator wants. That old me feels what I do now is not enough, it is too small, it is nothing compared to what needs to be done. The new me is beginning to understand that it is time to let go of my unfinished lives and fulfill a simpler destiny in this one. I pray for strength and courage. I pray for peace.