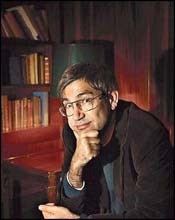 My experience with The New Life began with a hiss as I walked through the bookshop holding it in my hands. I’ve been hissed at for lots of things, but never for the mere act of a book in my hands, and the emotions that arose in me at that moment were not unlike the emotions pervasive throughout the book.

Oddly enough, The New Life is the story of a young man and his obsession with a magic book that changes the very core of the person reading it to the extent that they cease being the same person and begin new lives. The obsession, fascination and fear provoked by the book in the story and when the man hissed at me for buying it were exactly the same and I knew in my heart I would be a different person after the experience was over.

Orhan Pamuk is this year’s Nobel Laureate for Literature and was one of many Turkish writers held on trial for “insulting Turkishness,” a loophole in Turkish law that allows prosecutors to prevent a high degree of freedom of speech and is a highly contested issue for Turkey’s entrance into the EU. Local feelings are mixed about Pamuk and his work. Some say that he is not even that good a writer and something must change in translation making what he says profoundly interesting in other languages when it is dull and boring in Turkish. Others call him a filthy liar and say he is indeed guilty of insulting Turkishness, that he should be punished for the things he writes.

I love a good controversy and I will admit that it was the controversy surrounding Pamuk that led me to the bookshop in search of an English translation of one of his novels. After I was derisively hissed at for the pages in my hand, my interest was further piqued and I had the strangest urge to simultaneously hide the novel from sight and hold it above my head shouting ‘Viva la Revolucion!’ The surge of emotions throughout my body and spirit grew greater when I began reading to find in the opening paragraph:

I read a book one day and my whole life was changed. Even on the first page I was so affected by the book’s intensity I felt my body sever itself and pull away from the chair where I sat reading the book that lay before me on the table. But even though I felt my body dissociating, my entire being remained so concertedly at the table that the book worked its influence not only on my soul but on every aspect of my identity.

Incredible. It was like a dozen signs all rolled into one event and I was strangely exhausted by the entire encounter. When I began reading the book in earnest the feelings grew stronger and I felt that the author must have been in the presence of Angels or God even as he was writing. I had delightful chills during the entirety of the novel telling me I was not reading a simple book, but an entity of wisdom that would have found a way to exist with or without the author.

What I did not find were reasons to think Pamuk insulted Turkishness in any way, shape or form. The uncertainty of Turkey’s position as a bridge between the East and the West is a huge issue for all the characters as well as the uneven rates of modernisation throughout the nation. My interest is piqued to read more of his books and figure out which one was The One that got Turkey all in a tizzy, and certainly there is an added romance since I am living where many of the stories take place, although, I have been advised not to read his book in public places!

The New Life and its author are certainly Turkish delights and should not be missed by the avid reader, wherever in the world you may be. The taut suspense, the disturbing love story, the adventures through the magic book are phenomenal and not to be overlooked. If this book were a tree, it would be a liana whose enormous trunk lets down multiple new trees from the top down that turn into an immense jungle on its own. Like the liana, the history and the groundedness of this novel securely plant it as one of the greats.