Men and women became lovers too fast. They should have been friends first. That way, they could have realized that, despite the good times, they just weren’t right for each other. We two sexes inhabit this world like an unhappy couple jammed in an apartment, stuck with each other for the children’s sake. If square sex wasn’t fun, we’d probably live on separate continents by now.

It seems beyond any doubt that women are the champs of the human race, the prize winners, the evolutionary pinnacle. And yet my graceless brethren and I have the women of the world in a glass box, from which they can only watch in horror as we clumsily tear the world down around us. Drill baby drill, indeed.

How exactly did this happen? How did the insane sex get to be in charge? And make no mistake, we are insane, fundamentally. In fact, we men are lucky there’s not a third sex. That’s basically how men can get away with being such a boring lot – because women have no real other choice. We are the bearers of the seed, so if you women want to keep the species afloat, you better at least pretend to think farts are funny. I mean like real ones, in bed, next to you.

As a young man, I have a vivid memory of walking into my 3rd grade classroom and being randomly subjected to a vicious ten-kid pile on. Out of nowhere, some mad pack of young men I did not know decided to terrify me with a surprise assault, burying me totally. Knowing already that mercy finds no perch in little boys, I figured I was done for. There in the squirming abyss, as it were, I think I first realized that men are very confused, even tragically so.

It is, in fact, an unchanged truth that most of us “guys” are raised by the media to fear open emotion and sadness, and to ignore any bruising of the soul. And because we are in charge and don’t care much about women when it comes right down to it (beyond the obvious), young women are ironically allowed to develop as normal earthlings who get scared, giddily happy, openly sad, whatever – while men have to pretend to be some entirely other creature who gets excited about new nicknames for beer and movies based on toys we broke when we were 11. So, consequently, unguarded humanness becomes the province of women, the sex that isn’t in charge, and you can see how we might have a problem. (But seriously: women are smarter than us, more intuitive, live longer, and have more skill in dealing with emotion. How did the brutes get the wheel?)

This mad plan of ours, then, continues to produce a flood of samey-sort fellas who can only stand around and punch each other hard in the upper arm to prove they’re not girls. Add in the end-times marker that American men are now encouraged to remain in adolescence until they are dead, and we end up with a dysfunctional species. We have on one side a massive and twisted He-Man Women-Haters club full of “bros”, “brougheems”, and the dreaded “brahs” – and on the other side, women getting very bored and, I imagine, eyeing plans for general escape.

But, hard as it is for me to do so, I can’t help but feel sympathy for the barking slobs that represent my sex. Men have been driven insane, I think, by this stifling of their essential humanity, by this inorganic desire to be always riding off to war. It only hurts matters that such feelings of softness have become hallmarks of the gay male community, further driving the “bros vs hos” crowd into their evolutionary dead-end.

I stick with women. Makes sense to me. If I like having a woman sitting next to me, why not also enjoy having the ghost of the woman I almost was within me? Again, makes sense to me. I try to surround myself with as many women as possible, beyond just any significant other or mate, and that’s my advice to any like-minded men out there. Carpet your life, end-to-end, with the fairer sex. And I’m not talking conquests. I’m talking about lighting incense, seeing to their comfort, and being an all-around acolyte.

I can breathe easier in a roomful of women, even as I know that these women might regard me with amusement as a strange freak of nature, and I’m fine with that: I’m a straight male who doesn’t spend much time on sports, deeply appreciates film musicals, and yet still gets an erection when fixing a plugged drain.

But I’ll always be a guy, as I am still sadly dogged by the unavoidably male conclusion that the only way to fully know or appreciate a woman is to bed her, and that if you haven’t bedded her you can never know her. It is a madness that I can’t shake, and I wasn’t even in a fraternity.

So I’ll return to my opening metaphor: the two sexes, forced together in a shotgun wedding of epic proportions, charged with the continuance of the species and the ruling of the earth, and yet all the while not really being right for each other. Sure, women have learned to force themselves to like football and choke-sex porn to attract a mate; and sure, men, somewhere within that collapsing brow, realize that we’re missing a big part of this picture. So if the Mayans were correct about 2012, and the big divorce is coming, then at least it can be said that we each grew during our time together, which is I suppose is runner-up to happily ever after. 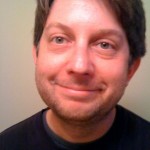 ©2010 Yancy Jack Berns.
Yancy is a writer living in Los Angeles.
An edited version of this piece was published on the Women’s Conference website.

2 thoughts on “Guest Blogger: Surround Yourself With Women — The Unedited Version”