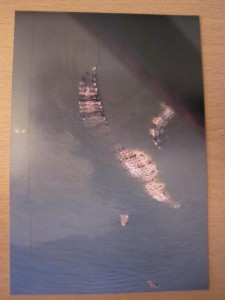 I was seven years old. Living in Thailand we saw some crazy things. One monsoon season Bangkok totally flooded to the point where people were taking boats down the road, like what is currently happening in Australia right now. My mom came home from work absolutely soaked and said she had seen snakes swimming in the water just by her. Ack! Thailand was our family’s third country since I was born. We had just moved from Zambia where my younger sisters were born and Bangkok was a far cry from the rural-esque Lusaka.

Like all the places we lived, it was very important to my mom that we experience the various facets of the people and culture, and seeing that just outside Bangkok there was the largest crocodile farm in the world, of course we had to go. The unique thing about this crocodile farm was that the area for people to walk and view the thousands of crocodiles was built on stilts so that the crocodiles could have as natural a habitat as possible.

Crocodiles are seen as sacred animals by some Thai people and we would often read of people sacrificing themselves to the crocodiles at the very crocodile farm we were to visit.

On arrival we walked up a huge flight of bamboo stairs that took us to the labrynthine network of pathways above huge, snapping crocodiles. I remember looking at my little feet and being able to see the crocodiles through what felt like massive spaces between the planks in the bridges. Frothing water, gliding crocs, their dinosaur faces and huge teeth momentarily appearing above the water then disappearing underneath. 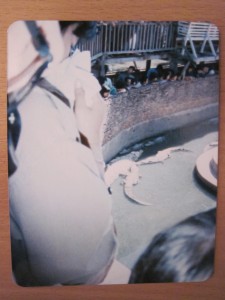 I was terrified and to this day my heart starts to pound when I am on any kind of bridge, but especially ones with wooden planks. We walked around the crocodile farm, me wondering if anyone would fling themselves into the pits. The piece de resistence was a show of sorts, in which men would wrestle the crocodiles, put their heads in their mouths and generally get far closer to comfort than I could imagine. Crocodiles have a distinct way they kill their prey: They grab hold and then spin, spin, spin underwater effectively drowning the creature so that it can bury it for consumption later. That is what was happening with the men in the pits, the crocodiles furiously spinning them around, the men experienced at holding their breaths, spin spin spin. The fact that these crocodiles were 2 or 3 times bigger than the men was terrifying.

In the years since that visit I am fascinated and fearful of crocodiles. I also have a great deal of respect for them, seeing as they are one of the few species who are more or less as they were during the dinosaur ages. I adore dinosaurs and so having these living fossils walking around the planet is mind blowing. The film Primeval, based on a true story of one of the largest crocodiles ever seen who, during the Rwanda genocide, developed a taste for human flesh from all the bodies being dumped in the river, had me oscillating between fear so intense I was on the verge of a panic attack but also a sense of wonder at that enormous, beautiful creature who is so much further up on the food chain than us what else can we do but have monster respect for it. (Great film, by the way, and was made by survivors of the genocide, which in a morbid way was very touching.)

I dream about crocodiles often. Big ones. The one dream I always return to features me and a group of people. The whole area is flooded and all I see are the roofs of houses and open spaces filled with water. The croc is bigger than the house, I know because even though I can’t see his body, I can see his eyes above the water and I can see the ripples left behind him. He circles us, waiting for the flood to increase so that he can chomp chomp chomp. One of the women is pregnant, hugely so, and I am worried that the stress will bring the baby. We have to get her help, we have to get to dry land, we have to find trees we can climb. There is rope. I get into the water, an attempt to get the rope to the next building to make a line so we can draw everyone over. I can’t see my feet, my heart pounds knowing that the croc could be anywhere, I can’t see him, I see no ripples. I don’t know if I should go as fast as I can or slowly so as not to draw attention. The crocodile is smart, I won’t fool him. I feel scales running against my legs, I count one-mississipi, two-mississippi, I reach ten-mississipi realising the croc is toying with me, playing with his food. I scream. As fast as I can I get back to the house and they pull me back up. The croc’s head emerges from the water, almost as big as me!, he eyes us and continues swimming around the house. I wake up covered in sweat, terrified.

When I heard that huge crocs and snakes have been swimming around people’s homes in Brisbane I got chills, so reminded was I of that crocodile dream.

I was seven when we first went to the crocodile farm. I had that dream when I was 29, and many others in the interim.

For me, crocodiles have come to signify survival, theirs and ours. They are ancient creatures, ageless in many ways. Crocodiles never stop growing, so when I think about the monster croc in Primeval, 25-feet long, I am amazed at how long this creature has lived on this planet and that he still lives, “affectionately” known as Gustave, and he had a meal just a few months ago even.

Many true stories about human encounters with crocodiles involve surviving among heavily loaded odds. The film Black Water is based on the amalgamation of several survival stories of tourists and locals in Australia who had near death encounters with massive crocodiles.

Steve Irwin, one of my heroes, was a crocodile whisperer and his respect for those creatures led to reciprocal respect from them. When he tried to get involved with other creatures with whom he didn’t belong, he was tragically killed, but he hasn’t stopped inspiring people in their respect for crocodiles and nature conservation.

Crocodiles have the power to remind us that even though we as humans think we are at the top of the monkey barrel and we set up our lives so as to validate that illusion, there are creatures out there to whom we are walking appetizers. Not only do crocodiles remind us to respect their place of power in the natural world, but also to remember that in the cycle of life, death and survival, humans are only one small cog in the wheel.

Have you ever seen a crocodile up close and personal?

6 thoughts on “Zuzu Irwin and the Crocodile Farm”