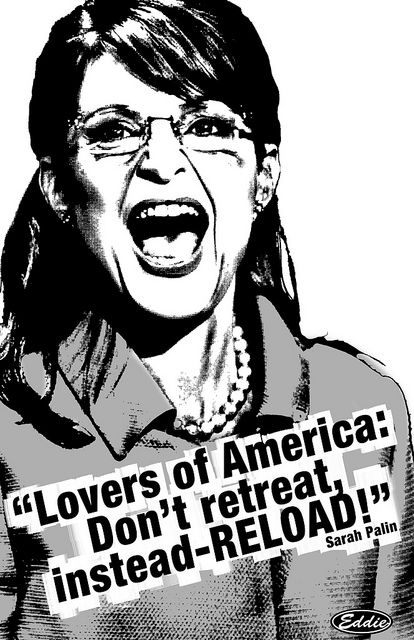 In the wake of the recent assassinations and assassination attempts in Tucson, Arizona I’ve had so much to say, but you know what? I’ve been scared to say it.

Because the people in Sarah Palin’s metaphorical cross-hairs actually get shot in the face.

I’ve never been to Tucson, but the shooting hit close to home. When reporters intoned, “Gabrielle Giffords was shot point blank in the head,” my stomach lurched.

Those two words, point + blank, are enough to send me into a PTSD attack. My own memories of a gun in my face never fade.

Cue the blame game: The shooter is crazy. A fanatic. Schizophrenic. Insane. Let’s all make it seem like these assassinations took place in a vacuum instead of the fearmongering culture of violence advocated by Sarah Palin, the Tea Party, and their supporters.

Cut to Sarah Palin saying, “My words have no consequences but words ABOUT my words can incite violence”. My double take was so dramatic I think I pulled a muscle in my neck.

America, what has happened to you? Is your racism so deeply entrenched that having a black man as Commander-in-Chief has pushed you over the edge?

I don’t care what personal problems the shooter had, has or will have. I find these excuses irrelevant.

America, you are the problem.

How can you advocate with the same breath the First Amendment right to buy and own a gun while denying a woman’s right to choose to carry a baby to term? Maybe if you held the right to life as sacred as you claimed then there would have been no means for the Tucson shooter, there would be no more mass murders, no more car-jackings like the one I survived but tragically lost my friend Wendy.

How can you claim to be “for the people” when you won’t even provide universal healthcare like all other developed nations in this world? Maybe this sick young man would have got the help he needed. Couple that with no access to guns…How many problems does that solve right there?

How can you expect President Obama  to fix all the problems created after eight years of George W. Bush’s (fraudulent) presidency?

What is the future of America as democratic state if this culture of violence prevents all effective dialogue? I fear that all of those who do not agree with Sara Palin’s doublespeak will be at risk for assassination, just like Gabrielle Giffords. How many moderates will turn conservative to protect their lives and families? How many people will simply give up, leaving a new black hole from where the vitriolic discourse can disseminate?

I hold Sarah Palin responsible for all the deaths that took place in Tucson.

She may not have wielded the gun, but she and her supporters have created the perfect climate for these politically motivated manifestations of violence. Her gun rhetoric, dumbed down for even (or especially) the most uneducated person to comprehend, is an actual call to arms that has been heeded. Ms Palin: What else would you be referring to when you say, “Don’t retreat, instead RELOAD?”

Sarah Palin’s call to arms resonates throughout America. A boundless echo. Where will her call to destruction upsurge next?

America, I have no faith that you will stand, and stop this monstrous woman from going forth and further soiling the potential of your dream and people’s lives. But, America, you need to. Wake up and smell the blood on your hands. New blood. I can smell it from here.

America, this nonsense has already gone too far. You are rotting from the inside. I can smell that too.

America, please come to your senses before it’s too late to save yourself. Or is it already?

You met our multinational Dialogue 2010 cultural innovators last spring in a roundtable discussion of hybrid life at expat+HAREM and followed their reactions to a polarizing book promotion. In this round they offer their thoughts on the recent shooting incident in Tucson, Arizona.

Add your voice to the conversation. Join the discussion on Twitter using #HybridAmbassadors.

5 thoughts on “The Culture of Violence”