A few weeks ago I finally finished my second novel, Crime Rave.

The final final version is now in the hands of my last team of readers and it’ll come out later this year.

Women, survivors, warriors­—the hard-core ensemble from “American Monsters” survive the worst act of domestic terrorism ever to occur on American soil when 35,000 ravers are murdered in cold blood. Regathered, and regrown from their remaining body parts, they must work with the LAPD detectives Atticus Red Feather and Synthia Günn to put together the pieces of this monstrous act and face a new horror. The science experiments of an elite underground lab team, led by Colonel Ripper Ransom—of Mai Lai massacre fame— want out, and the smog goddess Kaleanathi wants more souls to devour. What will happen if the survivors fail? The world is full of monsters, but the worst are yet to come.

But there’s no rest for the wicked, or writers who have several novels kicking about in their brains as I do. Three of them, in fact.

I woke up one morning rearing to begin writing Book Number Three: a zombie tale set in Prague replete with statues that come to life and continued goddess intervention in the lives of my crack team of badass superheroines and their trauma-related superpowers.

Hyped and excited and totally ready to go. Except the only problem was the words weren’t ready to go. The story has a vague outline, but I haven’t even begun research other than watching the first six seasons of Doctor Who.

And then—thankfully before all the horrible voices that tell me I suck, I’m a hack, I’m not an artist, I’m an infectious piece of human waste chimed in—I remembered: I’m a method writer.

I start with a vague idea of how I want my story to turn out stylistically and I spend months (or even years) immersing myself in similar genres until I have figured out exactly how all the voices in my head will appear on paper. I have a general outline worked out with the arc of the story, but it’s not one I’m married to, it’s merely my first guide to help me begin organizing and structuring the action.

Once I’ve absorbed all the information I need, only then can I begin to channel my story into word form. I’m a human conduit.

So, now, I need to devour books. 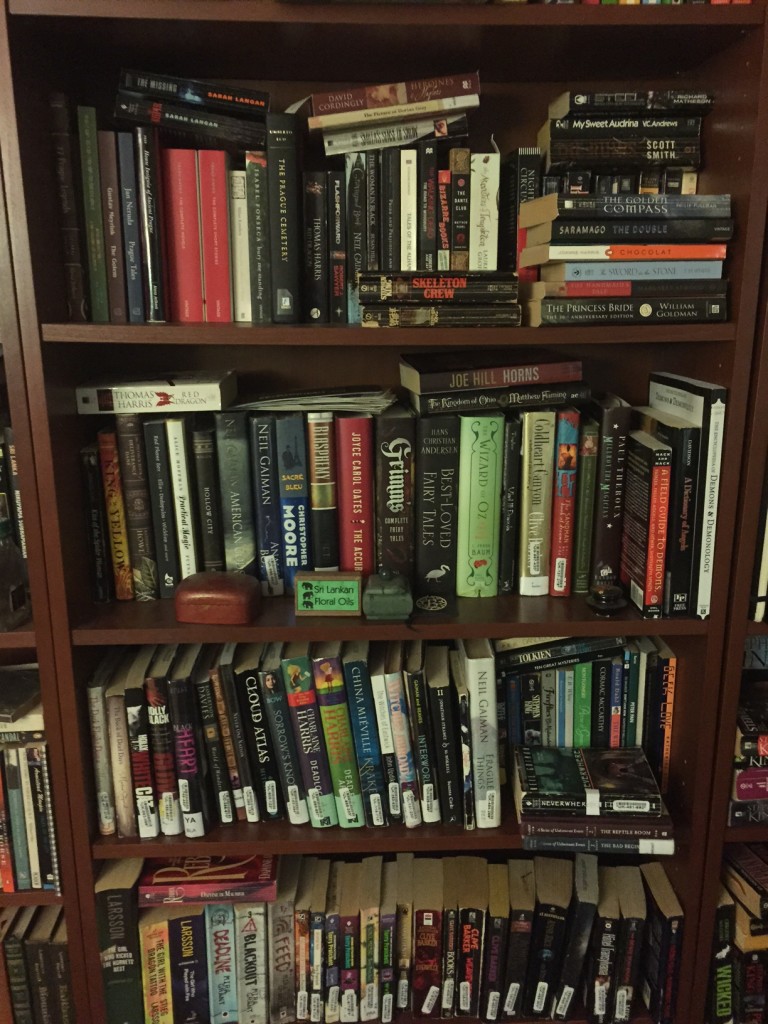 These are some of the tomes I own that make up just a fraction of the books I will read to get into character for Book Three. There are dozens more waiting in my Better World Books and Amazon baskets, even more bookmarked in my Lighthouse Point Library account.

By the time I’m done researching I’ll have read hundreds of books, watched hundreds of movies and television shows, and had several dozen bizarre dreams that will work their way into the fabric of my crazy quilt story. My house will have a minimum of three notebooks filled with musings on the characters, ideas, themes, and stories for reference when I finally begin writing.

It’s a rather epic process. And I forgot that it takes a lot of time, patience, including many moments spent not thinking about any of it at all, giving my intuition time to simmer with the narrative until the first shitty draft is ready to be put to paper. Several drafts later, several years later, then there it will be, a tidy and awesome proof copy like the one sitting on my desk for Crime Rave.

And in the meantime, those other two (maybe three) novels will get mentally worked on as well.

Inspiration is a wonderful thing, the way it crosses over from one work to another, shaping stories that are so far in the future they are a wisp of an idea, but alive and breathing nonetheless.

There’s a long and exciting yellow brick road ahead of me.

I’ve got my sparkling red shoes on and off I go.