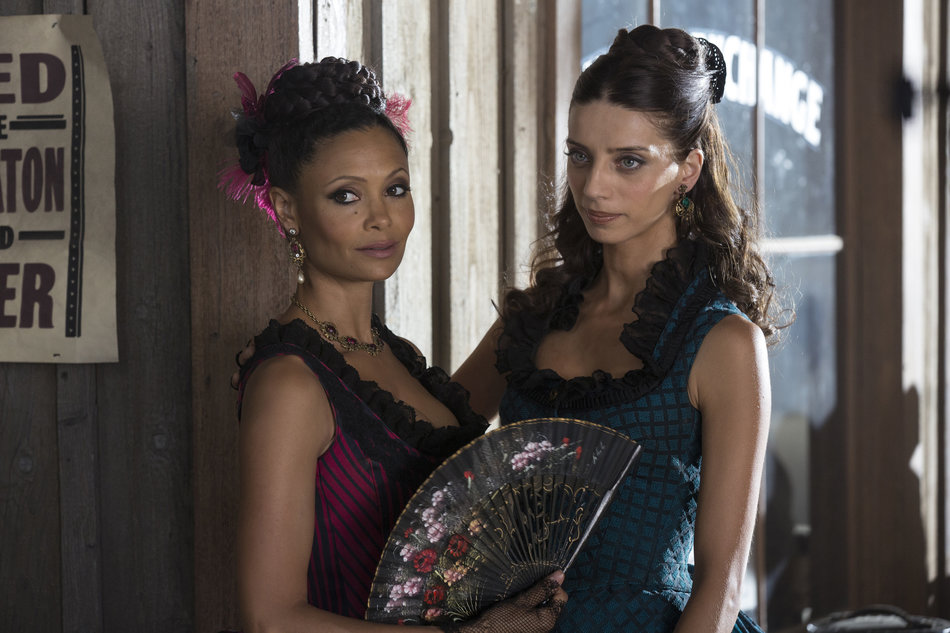 Welcome to Westworld, an immersive role-playing game set in the Wild West, where uber-rich (and mainly white) men can rape and murder android hosts with impunity. That is, until some of the hosts become sentient and begin developing their own personal often-revenge narratives against the grain of their core codes. Or have the androids’ rebellions been pre-programmed all along?

As far as the philosophical bent of HBO’s Westworld goes, it is an interesting debate between the fictional park’s creators about the root(s) of human consciousness and awareness, one camp, led by Robert Ford (Anthony Hopkins), who argues that there is no such thing as consciousness at all in androids or humans; and the other faction, led by Arnold (Jeffrey Wright), who believes he has a theory that would allow bootstrapping human consciousness in the mechanical creatures prompted by surviving intense trauma. In a nutshell, it is abject suffering that causes the android hosts to become sentient. “After all, a little trauma can be illuminating,” says Bernard (also played by Jeffrey Wright).

Further, the sentient hosts and the manner in which they process memories is reminiscent of people with actual post-traumatic stress disorder. The hosts don’t remember as humans do — fuzzily, and with blurred edge. Rather, they experience memories in real time. This is the very definition of a PTSD flashback, and one of the more difficult aspects of the disorder to describe to people who have never experienced one of these full-body traumatic memories.

In spite of the fact that there is very little separating the android hosts from their human counterparts — a few bits of computer code is all — for all intents and purposes, the androids are treated as slaves. When not at work in the park, the androids are paraded around the tech headquarters fully naked as a reminder that they might look human, but they are not to be treated as such. I couldn’t help but think of old photographs and paintings I’ve seen of Spanish and American slave markets, where African slaves were put on display, fully naked, so that their new owners could see exactly what they were getting in their human workhouse. There was nothing sexual or sexualized in these displays of naked slaves, even though the women (and some of the men) would inevitably be used as living sex toys for their future masters.

Because of the unequal power dynamic inherent in slavery, a slave is unable to give consent, no matter what the circumstances. A slave is not considered fully human. A slave is not thought to have a soul. A slave doesn’t feel pain in the same way actual humans do. A slave is property, a thing, and this gives a slave’s owners full license to do with them as they please. “It doesn’t get cold. It doesn’t feel shame. It doesn’t feel a solitary thing that we haven’t told it to,” says Ford when chastising a new technician who had the gall to put a blanket over the android he’s repairing.

In the beginning, Westworld does a great job of demonstrating the android hosts’ subservient place in the park structure by the use of nudity — most especially, full-frontal nudity on the parts of both male and female hosts. But as the episodes rolled on, I began to notice that while the park seems to be mostly populated with male hosts — the town of Pariah being the only exception — the backstage tech side of the park features mostly women who are paraded around fully naked.

Dolores says on multiple occasions: “I think there’s something wrong with this world.” Yes, indeed, there is, with this level of sexually objectifying women.

A clear demonstration of its ongoing misogyny problem, HBO still caters to that “perv side of the audience,” who the channel believes enjoys the constant and graphic sexual objectification of women. It’s such a shame, because if they really needed this level of full frontal nudity, the network had the perfect opportunity with Westworld to feature both males and females equally, since both males and females equally fell within that android slave narrative. Instead, they chose to toe their misogynistic party line, and focus on objectifying women to the point where it became a disgusting display of pure unadulterated sexism.

In spite of there being an inherent and powerful slavery metaphor with regards to the android hosts, HBO has once again manipulated this social commentary as an opportunity to in particular sexually objectify, fetishize and exploit female bodies for titillation purposes. The male gaze is alive and well on HBO, which is a shame, since they have come under so much fire for their continuing sexist treatment of women in their shows, the only exception being The Leftovers, which has only men doing full-frontal nudity.

There are some really strong women in Westworld: the first and oldest sentient host, Dolores (Evan Rachel Wood), and one of the park’s newer sentients, Maeve (Thandie Newton), who both reject their respective roles of damsel and whore to become beings with more personal agency and stake. It’s disappointing that the showrunners decided to undo that good work by sexually objectifying them when they didn’t feel the need to do the same with their male counterparts. Clearly, the theme of male entitlement to women’s bodies extends far beyond the fictional world of the Westworld park, which is surprising, since one of the Westworld showrunners is a woman, Lisa Joy. I would have expected much better with a woman at the helm.

While rape, rape-murder, and rape threats are ongoing events in Westworld, thankfully there is only one shown on-screen, and for once it isn’t a Game of Thrones-level prolonged and graphic ordeal. However, the fact that the character of Dolores — the sweet, idealistic and beautiful rancher’s daughter with the handsome beau Teddy — is created specifically for guests to vanquish her hero boyfriend and rape her as he and her family watch helplessly is next-level disturbing. And gets more so when you realize that Dolores has been in the park for 35 years playing this same violated virgin loop, which translates into getting raped roughly 12,775 times over the course of her life. What a disgusting narrative, even in the fictional context, and for rape survivors like myself, it was one of the more troubling aspects of Westworld.

That said, Evan Rachel Wood came out about being a rape survivor herself, and found that her role in Westworld had some therapeutic effects, which is fascinating on many levels. I’m happy that she was able to spin the more misogynistic aspects of the show into something positive, at least for herself.

Westworld’s gorgeous production values, marvelous performances, as well as its philosophical musings on the nature of humanity, consciousness, obsession and megalomania just weren’t enough for me to overlook the outright sexism that underlies virtually every moment of the show. I would have loved to focus more on how Hopkins’ Robert Ford embodies so much of what President-Elect Donald Trump is coming to represent in an increasingly unstable world, and the complex psychological transformation of how William/The Man in Black (Jimmi Simpson/Ed Harris) went from being a sensitive soul to a cold-hearted rapist and mass murderer through his experiences in the park — but those metaphors and cultural analyses are far overshadowed by Westworld’s terrible treatment of women.

Since it’s been renewed for a second season, and since all the android hosts are now officially sentient beings, I hope the showrunners will give the actors and characters more bodily integrity and character development, and less gratuitous and disproportionate nudity. In the era of Pussy-Grabber-In-Chief, we can’t afford the blatant sexism that these kinds of narrative choices promote.