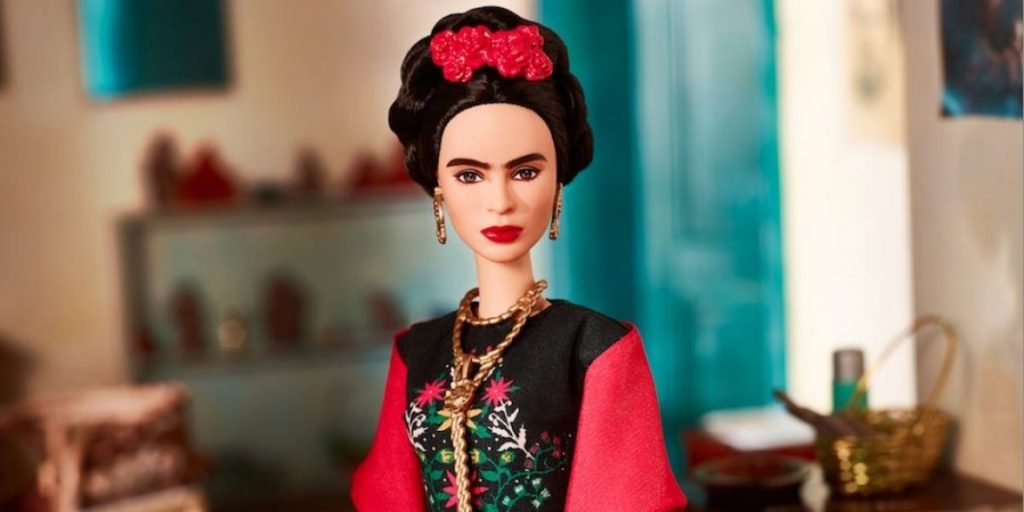 FRIDA ISN’T A COMMODITY, SHE WAS A PERSON WHO FOUGHT AGAINST MATERIALISTIC CONSUMERISM.

As someone who has spent almost 20 years studying the life and art of Frida Kahlo, I’ve mused for hours over what her doll version would look. Here’s the Frida doll I’ve imagined: Since she spent so much time in a wheelchair due to illness and so many surgeries, her doll would have to come with one as an accessory.

Accessories would also include a back brace, body cast, and washable paints so you could draw on her as she did herself. Her right foot to knee would be detachable, and modeled after the red boot prosthesis she designed and painted herself. Her clothing would be ethically sourced from the same villages she commissioned them in Mexico and would be an entire line all of its own to accompany the doll, as well as a variety of hairstyles and headdresses.

The doll’s eyebrows would be thick and meet in the middle, and she would have a shadow above her upper lip. Underneath her elaborate outfit, Frida’s doll would be criss-crossed with a variety of scars across her legs, pelvis, belly, and back; Frida suffered her entire life and her avatar would need to represent all the physical pain that inspired and informed her art. The doll would come with a booklet explaining all of this, and would be written in a way that encourages people to go learn more about her rather than just consuming her image because she’s hip now.

But since we can’t have nice things (ever), Mattel created the exact opposite of a doll honoring Frida Kahlo. Instead of looking even a little like Frida, they have made her into an actual Barbie. Her unibrow is softened as are her striking features, and there is no evidence of her disabilities at all. In a nutshell, Frida has been grotesquely whitewashed.

Having been a fierce Communist until her death, she would despise this consumerist and capitalist “tribute” to her life and work on so many levels. Everything that Frida did in her self-presentation eschewed Western standards of beauty. She refused to pluck her brows or wax her face; she didn’t shave her underarms or legs. She rarely wore makeup and instead focused on layering away her pained body under handmade textiles from remote villages in Mexico, almost single-handedly bringing some of these traditional weaving methods back from cultural extinction.

That Mattel has erased her disabilities is another thing that would piss Friducha off, and royally. Her health struggles were one of the main drivers of her art. She has been my—and many others—long-standing teacher of how to turn suffering into beauty, whether through dress, on canvas, in a photo or a poem. Frida’s disabilities informed her art and persona in a way that is inseparable, and yet Mattel has cleaved them apart. While Frida never claimed the label feminist openly in her life, she was always aware of and called out sexism when saw it. She certainly would have called sexist and ableist bullshit here.

The worst part is that with a bit of care and attention, thoughtfully studying her life and work, Mattel could have made an amazing and authentic Frida doll that came with her wheelchair, her back brace, her corset, and that incredible boot prosthetic. They could have even marketed an entire clothing line of Frida’s outfits and hair accessories to go with it. If Mattel was going to commodify a woman who was a staunch anti-capitalist, the least they could have done was do it properly. It’s such a lost opportunity, but also brings up a bigger picture of how Frida and her image has been more and more commodified as time goes by.

Frida’s face is emblazoned on all kinds of apparel, tchotchkes, jewelry, and even entire storefronts and restaurants named after her in order to draw in a certain kind of crowd who are here to consume Frida, sometimes without understanding who she actually was. I will confess that my home is indeed filled with all kinds of Frida object d’arts, many of which have been gifted to me by friends who understand my longstanding devotion to her. I love each and every one of those pieces because I am not a casual Fridanista. Each token, and each person who went out of their way to send it to me, has been a vital addition to my soul. People see me in Frida’s experience, just as I see myself in it.

My own art is very much informed by Frida’s life and creations, and any way you look around my house Friducha is looking at you. But my attachment to her is not material or superficial. I have her everywhere, my goddess, to remind me to keep making art from my pain. I’m not as strong as she was and I do need the visual reminder that in every hurt moment, in every twinge of suffering—whether physical, emotional, psychological or otherwise—lies an opportunity to transform it into something beautiful I can share with the world. Frida would want me to stand on my own artistic merits instead of riding on hers, and that is one of my bigger life goals. With her help I’m getting there.

But to those like Mattel who are capitalizing off her face while ignoring her still-loud voice and political beliefs need to stop what they are doing. Immediately. It’s sickening that Frida financially struggled her entire life, only making a few hundred dollars on each of her pieces (if even that) while she was alive and now that she is finally part of the cultural zeitgeist corporations—including colonizer’s museums—are making millions off of her. It’s unconscionable.

We’re living in an era where there is no excuse to consume without awareness. If you’re donning or selling a Frida shirt without having read even one book about her life and art, please stop. She isn’t a commodity, she’s a person who fought against this kind of materialistic consumerism. And if you don’t know anything about Frida, a good place to start learning is Hayden Herrera’s Frida: A Biography of Frida Kahlo.

If you’re so inspired by Frida’s story and talent that you must have her face around to keep those creative fires going, make sure the tribute is authentic and comprehensively honors her spirit, not just because it’s suddenly trendy now to do so.

One thought on “Frida Kahlo Was a Communist, So Stop Capitalizing Off Her Likeness”