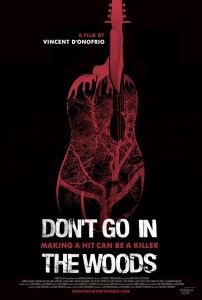 This review originally appeared at Anything Horror, September 2012.

“In this relentlessly tense slasher film, a well-dressed killer stalks Nick and his bandmates through the woods as they attempt to write some new songs,” says the description of DON’T GO IN THE WOODS on Showtime.

This is the worst description of a movie, and in particular of this one, ever written. That’s the likely reason why the first time I watched DON’T GO IN THE WOODS I was utterly confused. Where is the relentlessness? Where is the well-dressed killer? And why the hell are people suddenly breaking into song?

After the movie was over I had to Google it to see what the deal was, to find that the film was meant to be a slasher musical and it was Vincent “Eggar” D’Onofrio’s directorial debut. Might have been good reference points to include in the blurb, Showtime.

Now that I knew what the film was going for I eagerly awaited for its reappearance on Showtime so I could watch it without all the initial frustration of misunderstanding. And it was so worth it.

The one thing Showtime’s synopsis got right was Nick and his bandmates going into the woods to write some new songs. Nick, quite the Spartan, insists on no women, no drugs, no alcohol, no cell phones for the duration of the weekend, claiming that the inspiration of his childhood woods and fresh air would be all they need to write their breakthrough album. He throws weed out the window, he even goes so far as to smash all their cell phones. Yikes.

“Light a fire and pray to the songwriting gods,” Nick says.

And it seems to work. The boys hunker down and start writing some very thoughtful tunes, digging deep into their poetic souls: The makings of a great record develop. Enter, the women: the band’s groupies and friends make a surprise appearance in the woods in the middle of the night equipped with marijuana and tons of liquor, claiming they followed them out there as a surprise.

Nick is fucking pissed. No women was the first rule on his list, and he’s even less happy that one of them is his ex. In spite of the women’s presence, the band continues to write some great tunes, and the a few of the girls even have a chance to sing their own songs. It’s a musical, remember?

One of the girls gets upset that band member Anton is suddenly flirting with the group slut and storms off into the woods with another girl, singing her pain as they go back to the car with the intention of driving to a motel they spotted down the highway.

Neither of them make it. Slasher movie, remember?

More swan songs are sung as the body count rises, many of the ones left standing not even knowing people are missing, let alone dead, as the film reaches quite a stunning musical and murderous climax.

DON’T GO IN THE WOODS is a remarkable film, especially if you’re like me and a fan of both musical and horror genres. There are so few that fall into both categories — the “Once More with Feeling” episode of BUFFY THE VAMPIRE SLAYER, ROCKY HORROR PICTURE SHOW, SWEENY TODD, LITTLE SHOP OF HORRORS, and REPO: THE GENETIC OPERA. It’s a singular subgenre that I for one would love to see much more of, and DON’T GO IN THE WOODS is really nothing like any of its colleagues with sparse sets and untrained actors.

The musicians featured in DON’T GO IN THE WOODS are extremely talented and songwriter Sam Bisbee’s ditties are all simple, but moving numbers, and in spite of only having seen the film once before the songs stuck with me and I was even singing along during my second viewing. That’s pretty cool, man, I’ve got to say that was one of the most enjoyable aspects of watching this film again. I actually still have some of the songs in my head and I can see a great cult movie night with fans of this one, the whole audience participating.

This isn’t a film for everyone, especially if you’re not a big fan of acoustic guitar and a Cure-esque style of singing and songwriting. But there’s something to be said for a first-time director like D’Onofrio to push the genre envelope like this. He’s teased out some interesting performances — none of whom were professional actors or even want to be, the death scenes were wicked and several were more than cringe-worthy. I found the story’s end to be an absolute surprise and quite brilliant. Sam Bisbee’s writing is superb.

In an interview with the Huffington Post, D’Onofrio hinted at a sequel, and I am so hoping that will happen.

For genre fans this is a must-see. Where else can you find a film that is almost equal parts music, blood, and guts?