Originally published at Anything Horror. 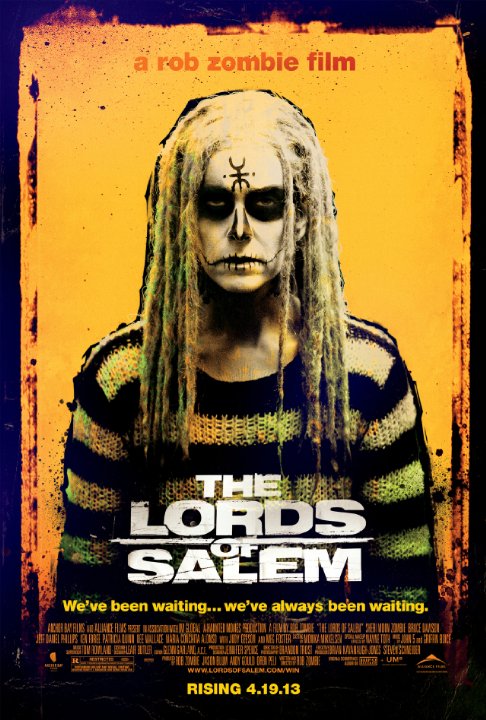 THE LORDS OF SALEM.

(Confession: I had to fight the urge to type THE FUCKING LORDS OF SALEM, DUDE.)

Rob Zombie’s newest opus opens in a horrific sequence featuring the creepiest group of Satan worshipers you’ve ever seen, in which, among a host of decrepit nastiness, a baby is born and murdered because it isn’t the son of Satan for whom the witches were praying. What Rob Zombie packs into five minutes here is astounding. And awful.

The narrative portion of the film opens in the characteristically stark fashion of which Sir Zombie is wont with his beautiful wife, Sheri Moon Zombie, dreadlocked and heavily tattooed, as her alarm goes off in the evening. Bizarre, right? Her apartment is covered with strange art and odd sculptures (all of which are loaded with symbolism waiting to be unpacked on second, third, fourth viewings).

Heidi LaRoc is a late-night DJ with two partners, Whitey and Herman, who are all measure of cool/funny/witty and everything else you’d want from a radio show team. The fun-loving colleagues enjoy a tequila binge after wrapping and on their drunken way out the station the receptionist gives Heidi a record in a carved wooden box engraved on the inside with her real name, one she says nobody should know. “Who’s it from?” her partners ask. “The Lords.” Thinking nothing much of it, she flounces her dreadlocked tattooed hotness out of the station.

Back at Heidi’s wicked-decorated apartment, she and Whitey continue drinking until Whitey suggests they play the record. His every attempt to do so causes the needle to skip across the vinyl. It’s not until Heidi gets her drunk ass off the couch and places the needle on the record does it begin to play a creepy-as-fuck orchestral melody. Think Goblin’s score to Suspiria, it’s that kind of haunting. Heidi goes into a hypnotic state, eyes-closed and body swaying until the record ends.

The record troubles her, but that doesn’t stop her from bringing it into the station for the next night’s broadcast in which local historian Francis Matthias, who has just published a book on witches in Salem, is their guest. He references the witches we saw in the opening sequence, noting that it was Reverend Jonathan Hawthorne who eventually put the coven of witches to death by fire.

Heidi plays the record and women all over town stop what they’re doing while listening to the radio, in the same kind of trance she was upon first absorbing the sounds. Heidi looks ill hearing the record again. Historian Matthias takes over being the troubled one as the music is clearly making Heidi sick to her stomach.

Shit starts to get weird and quick as the effect of the music seeps into Heidi’s bones, dreams, and everything else. The now-dubbed “music group” The Lords of Salem send a crapton of promotional material to the radio station for a one-night only free concert as Heidi begins a slow and quiet, but dramatic, descent into whatever spell the record from the Lords are weaving.

To reveal anything further about the grotesque downward spiral to come would be to spoil, so instead let’s talk about Rob Zombie’s influences, which felt heavily Dario Argento-ed and David Lynchian. The repetition of the music from the record was terrifying in and of itself, as a coda that punctuated the visual symbolism and kind of body horror exemplified by 1970s and 1980s art films like the already-mentioned Suspiria and its follow-ups, and others in the genre like Blow-Up. I was also reminded of the scene at the roadhouse in Lynch’s Fire Walk With Me in which migraine-inducing music blares and we need subtitles to hear what the characters are saying.

Director Zombie uses David Lynch’s trope of focusing the camera on an inanimate object or piece of art while the horror unfolds, a technique that causes the film to stick with you long after you’ve left the cinema. Suddenly everything, every little thing, has a meaning you never noticed before. And how weird is it that there’s a Satanist goat story in your Facebook feed just moments after getting home? The film literally changes how you see the world once you’re out of its grip.

But before you think this entire film is an homage to other horror greats, Rob Zombie stamps it with his customary found-footage fascination — extra points for every old black and white film you recognize — and that House of 1,000 Corpses kind of visual horror aesthetic that makes the film all his own. Zuzu dubs thee “Beautiful Horror”. There is so much monstrous beauty and power in this film, my eyes were bugging out and I could barely breathe.

Sheri Moon gives her best performance to date. As the sickness takes over her, you feel it. Her eyes avoid the camera as if telling us don’t make eye contact or you’ll get what she’s got, a far cry from her usual coy, eyelash-batting before she opens up a can of murder. Rob Zombie has captured her intelligence in way his roles for her never did before, and for that I raise my glass. I hope he’s got a whole slew of these parts for her in the future, she’s got way more to offer genre films that I ever gave her credit for. Apologies, Sheri! I was wrong about you.

If you’re not a fan of Rob Zombie, avoid this film. If you’re not into art house horror, don’t bother watching THE LORDS OF SALEM. The heavy-laden symbolism in every shot will annoy you and possibly amuse you, as it seemed to with some other audience members. If you’re like me and crave that old-school intentional and philosophical body horror then you might end up like me, hours later unable to think about anything else. I had positively psychedelic dreams for three nights after seeing this movie. An intense cinema experience I’m glad I sucked up the courage for — my movie-going days are clouded by the real-life horror of the Aurora, Colorado shooting, even all these months later.

I waited years for this film, Zombie’s first since his magnificent follow-up to his brilliant Halloween re-imagining. (And if you didn’t enjoy Zombie’s Halloween version then follow the above advice and don’t bother with THE LORDS OF SALEM. Nobody wants to hear you bitching about how you hated it when you basically set yourself up for failure.) All this time I’ve gobbled up every morsel my dear friend Scott would post in my favorite horror blog as the saga of getting THE LORDS OF SALEM made and distributed unfurled. I feel oddly at peace having now finally experienced it. Because that’s what it is, an experience. THE LORDS OF SALEM is not a mere movie, just as the record Heidi receives is no ordinary record.

THE LORDS OF SALEM was simultaneously nothing like and exactly what I expected. I’m already jonesing to see it again. Because of its limited theatrical run, it’ll be be on DVD before we know it, and here’s hoping the bonus features and commentary will reveal more secrets of the Lords. I want to know everything!