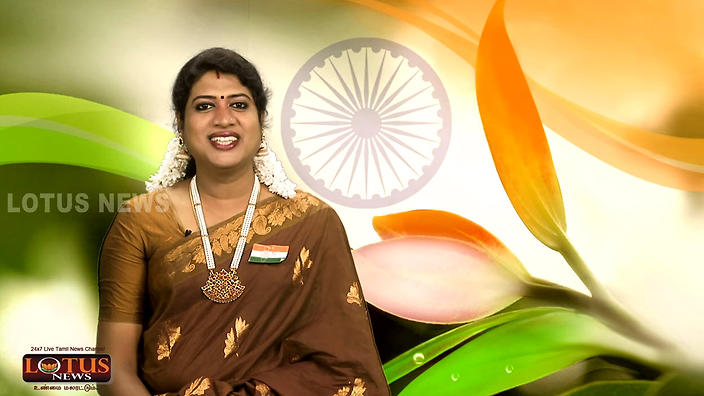 Incredible India, in all its marvelous contradictions, has surprised us all by hiring its first transgender news anchor, Padmini Prakash. Prakash has been leading a daily primetime news program on India state Tamil Nadu’s Lotus TV since August 15.

In many places in the world, transgender communities do their best to stay hidden. While they are still marginalized, India’s hijra — a term that refers specifically to a subgroup of male-to-female trans individuals — live their lives out in the open, often in commune-like living arrangements led by a guru. India even recognizes a “third gender” for hijra, and this information is included on their passports and other identity documents. Hijra are often called on during special occasions like a birth, marriage or other celebration, to bestow blessings upon the home and family.

Some argue that the term “transgender” isn’t appropriate to describe the hijra community in India and the phrase “third gender” is more accurate, but hijra often use the terms trans and transgender to self-identify.

One of my first memories from when my family moved to New Delhi in the early 1990s was the cadre of hijra who came to our first home, welcoming us to the neighborhood (and, of course, seeking some baksheesh for their trouble). Bollywood songs were blaring, the hijras’ faces were garishly painted and they danced and sang for us in bright and sparkling outfits. But underneath the frivolity of their performance, everyone could see these were powerful people who you’d never want to cross.

Being a conservative Sri Lankan, my father’s fragile masculinity was threatened by the hijra — he refused to pay them. Our neighbor had to warn that if we didn’t give them something for their time, they would make our lives a living hell and it would potentially become dangerous to stay in our home. This particular group of hijra had been known to throw bricks and stones through windows and physically intimidate families who did not pay their respects. My mother went out, paid them and thanked them kindly; they blessed us and our house and promptly danced off, arms in the air, bangles jangling and music blaring. I’d seen so many wild things in my life even at that early stage of 13, but meeting hijra at our home in Vasant Vihar was one of the most fascinating.

Hijra have appeared in Indian history art, and literature as far back as the Kama Sutra, which was written sometime between 400 BCE and 200 CE. They also appear in the epic poem The Ramayana: when Rama leaves Ayodya, fulfilling his 14-year exile, he goes into the forest, where he is followed by a huge group who then witness his heroic speech. So moved are hijra by his words, they remain in that spot until he returns 14 years later. As a reward for their devotion, Rama confers upon them the ability to bestow blessings on auspicious days like births and weddings, a ceremony that is now known as badhai — the same singing and dancing that took place at our home.

Hijra also appear in The Mahabharata, where the hero Arjun becomes Arjuna, assuming a hijra identity to disguise himself — even going so far as to perform hijra ceremonies while incognito. Arjuna marries Iravan, a warrior who offers to sacrifice himself to the Goddess Kali so that the Pandavas may win the Kurukshetra War. In southern India, some hijra call themselves aravanis and claim Iravan as their creator. Each year between February and March in Tamil Nadu, hijra celebrate a visually stunning 10-day Mayana Kollai ceremony, reenacting the wedding of Lord Krishna (Arjun/Arjuna) and Iravan, replete with Iravan’s sacrifice and a mourning ritual for his death. Ellen Barry writes for the New York Times: “Any trace of human expression is lifted, and the kothis begin to resemble the deities they worship. The ordinary is tethered to the divine.”

In recent years, a beauty pageant has been added to the event, along with a variety of health seminars that have focused on HIV/AIDS, since this population is particularly vulnerable to sexually transmitted diseases; many hijra make their livings as sex workers. Hijra from all over India travel to attend the festival, as do many thousands of others.

Hijra first began appearing in Bollywood films in 1974 in Kunwaara Bap, and tended to appear as caricatures for comic relief purposes. The first nuanced and sympathetic appearance of hijra in Hindi films wasn’t until 1995, in Mani Ratnam’s Bombay, and there have been many more in the years since, including documentaries like the BBC Three’s India’s Ladyboys and the National Geographic’s Taboo, which explore life in hijra communities as well as the many dangers they face.

While there is a healthy fear of upsetting a hijra community, there is still a great deal of violence against them that mostly takes place when they are on their own or if they are a sex worker. The Indian government may recognize a third gender, but they don’t recognize sexual violence against them, and often hijra are raped, beaten, and assaulted — even by the police, if they report any crimes. The HIV/AIDS rate among transgender folks in India is 8.2 percent — much higher than the national prevalence of .31 percent, according to Avert. Many hijra don’t have the same access to education, health care and other social services that other Indian citizens do. Also, third-gender hijras are barred from voting in India’s elections, giving them less power over their governance.

The battle for hijra and trans rights

In 2014, the Supreme Court of India officially recognized the hijra community as “third gender” and proposed a series of rights and measures to protect them, including the right to self-determination of their gender identity. According to the Hindustan Times, “This meant that people could identify their own genders without having to seek certification and was meant to do away with years of oppression and torture at the hands of state actors who refused to recognize transpeople.”

Earlier this year, a Transgender Rights Bill was proposed by social justice minister Thaawarchand Ghelot, but trans activists in India found language in the bill was not only misgendering (referring to hijra as “he”), but also was seriously lacking in concrete plans and steps that the trans community in India can take, especially when actively being discriminated against. The new bill also mentions nothing about recourses or processes to combat violence against the trans community by the police.

“This is a huge gap, since so many transgender persons face police violence,” Gowthaman Ranganathan, a lawyer based in Bengalaru, told The Hindustan Times. The bill will rely on doctors and “appropriate government actors” to determine whether or not an individual is eligible for trans benefits, and there are no guidelines in place as to who these doctors and government officials would be — nor whether they have the qualifications to make decisions about other people’s gender identities. The Hindustan Times also notes, “This has infuriated activists, who say the provision encourages gatekeeping of identities, and will lead to corruption and favouritism as many will be forced to compete for meagre resources.”

“The gatekeeping will exclude many transpeople, including those who haven’t yet or don’t want to undergo operations,” L. Ramakrishnan from the Chennai-based NGO Saathii told The Hindustan Times. “The Supreme Court said transgender is not about body parts. This is a draconian provision open to abuse.”

While the political battle to protect the human rights of the transgender and hijra communities in India continues, earlier this year fashion designer Sharmila Nair dedicated her new line of clothing to the transgender community, even going so far as to call it Mazhavil, the Hindi word for “rainbow,” and has hired two transgender women to be its spokesmodels in an unprecedented move for India’s fashion industry.

However, the most marginalized of the marginalized in India’s trans community are trans men. According to New Delhi TV: “The term transgender is often understood to refer to hijras or transgender women. But this definition leaves out other identities, like transgender men, who are yet to find recognition. … The reason, they say, is that they have no support system, no spaces of their own.” At the 2015 Hijra Habba, a conference focusing on issues of the trans community, 350 trans women attended, but only five trans men.

There is still a long way to go before India’s trans community is fully integrated into mainstream society, especially in terms of education, voting rights and job access. Still, India has taken some great strides toward recognizing the trans community and its place in the nation.