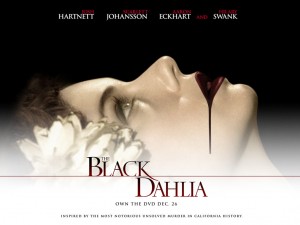 One of the things I love almost as much as old movies themselves are modern movies made in the old movie style. The gritty film, the glamour, the manner of speech. I love to see whether modern actors are able to capture something of that Hollywood heyday, the real days of the Silver Screen, not just the modern good looks and naked bodies paradigm. Back then, an actor had to be able to not only act, but sing and dance and talent was far more important than looks.

As much as everyone hated The Black Dahlia, I thought it was fantastic. It was a pleasure watching Scarlett Johansson, Hillary Swank, Mia Kirshner and Fiona Shaw bring the 1940s to life. The story of the still unsolved L.A. murder of actress Elizabeth Short was an unnerving backdrop to this period piece, and the gift that 2006 gave the story was that the context of Elizabeth’s murder could be portrayed in its fullest. Los Angeles’ sexual depravity, the seediness of Hollywood’s casting couches, the totally unglamourous aspects of the Glamour Capital of the 1940s comes to life in a most vibrant of ways. And these four women! How their performances shine! And especially Fiona Shaw, also known as Harry Potter’s aunt in the film versions of the book, whose performance as an insane socialite was spectacular, albeit a supporting role. Mia Kirshner’s haunting performance as Elizabeth Smart calls to mind the footage in Twin Peaks of the already dead Laura Palmer. Hillary Swank is amazingly like Katherine Hepburn, even though so many actresses have tried to emulate the quirky star with very little success. I keep watching the movie to delight in these delicious performances. They are out of this world.

Simply put, this film would be a flower that blooms only at night and needs human blood to open. Disturbing, beautiful, and dangerously exciting. I can’t wait to read the book and watch it again. And again. And Again.