Chapter 1: The Secret Life of Stone

Underneath the fair city of Prague live a race of creatures known as The Cobblers. A cross between trolls and dwarfs, but with the playful personalities of fairies, The Cobblers mine and harness the energy of a substance known as organite, and it is this substance (not oil or electricity) that keeps Prague running. The Cobblers are tricksy beings, and though they rarely breach the surface of Prague, they like to keep the humans above on their toes. Many a person, merrily walking along a cobblestoned Prague street will all of a sudden catch their foot on a stone. Sometimes they trip and right themselves, other times they will hurtle towards the ground, with the resultant scrapes, bruises and even broken bones to accompany the fall. These instances are The Cobblers tripping you up, sending you a message to watch your step, be aware of your surroundings, pay attention to the world around you. The harder your fall, the more dramatic is their message to you. If you listen hard after one of these Cobbler encounters, you can hear them chuckling, and you should thank them, because they have helped you return to Earth. They have infused you with the power of organite, the most magical substance on this planet, besides love.

There is a woman named Zuzu who has known about The Cobblers since her first year in Prague, when she stubbed her big toe on a Cobbler’s stone, broke it, and wasn’t able to wear open toed shoes for the next two years because the nail had become so deformed. With that new reminder of the many underneaths of Prague life (the overwhelming presence of vampires around town being another), Zuzu started to pay more attention to the life around her. At the time of her toe-stubbing incident, Zuzu didn’t have many nice things to say about her new home and the more she got to know the habits and behaviours of The Cobblers, she realised the warning may not have been so benign. Zuzu realised that organite was not the only substance being mined by The Cobblers: they also cull necronite from the ground under Prague, and this substance has none of the life-giving and energy-producing qualities as organite. Quite the opposite, in fact. Zuzu accredited the great number of zombies in Prague as a result of prolonged exposure to necronite.

Zuzu always figured that The Cobblers were small creatures, hence why they tend to only push up single cobblestones with which to trip up humans. On Sunday June 27, 2010 Zuzu received evidence to the contrary: The crossroads, including the tram tracks, near her home pushed up through the Earth as if a massive Cobbler was playing a joke on Prague 2. The street, rising up a good foot higher than usual, constipated a line of trams that then had to backtrack and reroute. Firemen arrived and the police cordoned off a huge chunk of the road. Onlookers, including Zuzu, scratched their heads and marvelled at how could the structural integrity of such a solid feature be so breached as this. Zuzu asked a policeman if they knew what had happened. He shrugged and said, “No idea.” The firemen pulled up a hydrant from under the street, plugged in their hoses and began to wet down the protruding concrete and metal. Soon, a river ran down Vysehradska. Maintenance men appeared, also scratching their heads at this bizarre occurrence and began the process of breaking down the concrete and re-welding the tram lines back together.

In the days since, the trams take extra care as they pass the crossroads near Zuzu’s house, crawling by at a snails pace until they have passed the offending strip of land.

Zuzu has begun to reconsider her whole theory about what The Cobblers may look like, as well as why such a dramatic uprising would take place just metres from her home. Was this incident the work of a King Cobbler? And what else could be living underneath her feet? 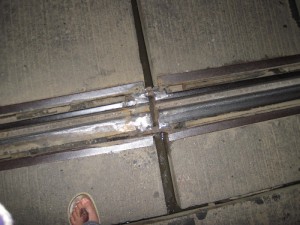 3 thoughts on “The Cobblers”