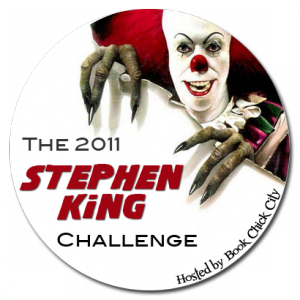 Unless you are a first-timer in ZuzuLandia then you already know of my complete and undying love for Stephen King (and River Phoenix, but that’s beside the current point). When my wolf/dog Cubby passed away at 16 years of age, Stephen King became the oldest friend that this globe-trotting Third Culture Kid has ever had.

I have read every single Stephen King book at least once, including the new “Full Dark, No Stars”, and most of his works I have read many more times than that, especially my most favourites like “Rose Madder”, “Bag of Bones”, and “Black House” (co-written with Peter Straub).

You might be wondering why would I then be interested in Book Chick City’s Stephen King Challenge 2011 to read and review 6, or 12, or more of Sai King’s work? My answer: Just because I have read all of his works doesn’t necessarily mean that I’ve written about them. And just because I’ve read everything once, does not mean I’ve had the chance (or motivation) to re-read them, which any true King fan knows is when the true brilliance of his writings really begins to shine through. All of the incredible plot and character development that sometimes gets overlooked during the first usually-stressful reading where you just want to know what the hell is going on and HOW DOES IT END?!?!?!?

For the most part I keep the pseudo-orgasmic pleasure of reading his words to myself. His works are slices of magic and sometimes magic can dissipate if you talk about it too much, or at all. Plus, if someone says, “Well, you’re the stupidest person since Sarah Palin if you like Stephen King,” I must to then swallow the urge to hurl back a more damaging retort (or fist) or worse, defend what is a true love. How does one even begin to do that? In the same way I cannot begin to describe the how and why of my love for River Phoenix even now more than a dozen years after his death.

We’re back to the “why” again, aren’t we? On my bookshelves here in this Hell known as Prague, I have 40 Stephen King titles displayed. It’s a lot, yes, but these are new additions to my collection. After a life of travel I’ve donated, sold or lost the original copies I had (including the edited version of “The Stand”, a fact that irks me to this very day) and I’ve been slowly reclaiming them through new sources.

Some of the books on my shelves here I have only read once. Like “Cell”, “Lisey’s Story”, “Under the Dome”, “Danse Macabre”, “The Eyes of the Dragon”, “Just After Sunset”, “On Writing”, “Duma Key”, “Dreamcatcher”, “The Talisman”, “The Dark Tower” (Volume VII) and “From A Buick 8”. That’s 12 King titles right there. Great stories, great books that I have only experienced one piddly time, and 2011 will be my opportunity to revisit this collection. I won’t limit myself to these (I read pretty darn fast and spend lots of time commuting on trams), but I think it’s a great starting point for a 2011 filled with beautiful writing and lots of inspiration.

If you’re a fan of Stephen King then please consider joining in the Book Chick’s challenge. If not, then maybe some of my reviews will convince you to give this amazing man another try. A Zuzu can hope, right?

May long days and pleasant nights follow you into 2011.

3 thoughts on “The Stephen King Challenge 2011”