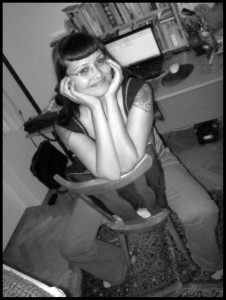 We have Sezin Koehler, a former writer on indigenous issues at the UN in Geneva, as our first expat guest. Sezin currently works in Prague as a translator/proofreader for non-native English writers, is a regular contributor at expat+Harem, and also loves to write about horror, being a Third Culture Kid, and her experiences as an expat.

OS : Where are you from originally? Where do you live currently as an expat and what brought you there?

SK : Where I’m from originally is a bit tricky for me to answer: I’m a Third Culture Kid, my mum is Lithuanian-American and my dad is from Sri Lanka, but due to my mom’s job with UNICEF when I was growing up we lived all over the place. I guess you could say I am from all those places originally, but when does the original stop?

Currently I live in Prague, Czech Republic and I moved here with my husband who had lived here before and loved it. At the time of our decision, we were living in Istanbul and wanted to move back to Europe, but these days as US passport holders it’s not so easy to get visas in many European countries. The Czech Republic was and is one of the few places that still opens its borders to us, although even in the time we have been here that has become much more strict with its visa policies for Americans.

OS : What is your profession?

SK : I have quite a few actually: I work with Charles University and the Institute of Gender and Sociology proofreading manuscripts and reports for publication in English. I also manage an after-school care program at an international school for a couple hours a day. The rest of my time I spend writing, be this articles, guest posts for other websites, my own blog, or working on my novels. My first novel, American Monsters, was launched earlier this year and I am currently halfway through its sequel, American Monsters in Prague.

OS : What is the main difference (in culture/lifestyle) that you observed between your home country and your host country?

SK : Again, a bit tricky for me to answer since I don’t really feel I have a home country per se, I’m more a global nomad. So I’ll compare the two places that make up my ethnicity. Prague is different than California, where I went to university and ended up spending the most time in any place (7 years), in that here we have an amazing public transportation system that allows me to not have a car and get around without too much trouble. It is extremely cold here, which I find makes people much less friendly and open than they were in California. The legacy of Communism also plays a part in this.

Prague and Sri Lanka are like night and day, quite literally. It is always sunny in Sri Lanka, always warm, the people are friendly and helpful even if they have nothing, which is a far cry from people in Prague who really keep to themselves and don’t reach out to help others in public. Sri Lanka is a developing nation, so there are a number of ways that the infrastructure need improvements and public transport in Colombo is nothing like in Prague, although both places have a very dark legacy of internal conflict that I feel has an effect on the cultural psyche.

OS : What do you like the most about your host country (something you would miss, were you to leave the country tomorrow) and what do you dislike?

SK : I really enjoy the aspect of public transport being so accessible and Prague is an absolutely stunning city, filled with beautiful and creepy energy. That sense of magic and enchantment, although menacing at times, will be something I miss greatly, as well as all the inspiration for art and writing the city has allowed me.

In spite of being a capital city, the population is very homogeneous and being a bi-racial person who could resemble a Roma woman has made me feel in danger on many occasions. I know a number of other Sri Lankans, men and women, who have been attacked by neo-Nazis, and sadly this is a common occurrence here. I was recently at Lady Gaga’s Monster Ball and as I was looking around I noticed that I was one of the few people of colour in the audience. That’s a bit of a scary feeling, especially considering the violence that can accompany the racism and xenophobia that runs rampant here.

OS : How would you describe the locals? Do you have any local friends? How did you happen to meet them?

SK : The Czechs are very reserved people and known for not being all that friendly. Because of so many centuries of one occupation after another, they have come to distrust foreigners and still aren’t quite used to the growing population of immigrants in Prague.

I have had a few local friends over the years and many of them I met through work. The pattern I noticed was the most friendly and inviting of them either had a partner from another country or had been an expat at some point themselves.

OS : Are you learning the local language? How are you doing it? What would you advice those who are learning a language?

SK : I’m not actually learning Czech, which is terrible of me! I just never thought we’d be here this long, to be perfectly honest. However, I do have a second language, Spanish, and something that helped me a great deal was watching Spanish films. I would watch them in Spanish with Spanish subtitles, and this allowed my vocabulary to grow exponentially. Also, I watched films in English (my native language) with Spanish subtitles and found this helped me pick up colloquialisms that would have taken me years to learn otherwise.

OS : How do you rate your expat experience so far on a scale of 1 to 10 and why?

SK : This is a tough question! As far as inspiration goes and the sheer volume of works I have created here (plays, screenplays, my first novel, published pieces in print and online, art, photography, and more) I would rate Prague with a 10.

But as far as feeling comfortable, feeling safe, and welcome here goes, I would rate Prague 3.

OS : What has worked for you, in terms of making your expat life a fulfilling experience. Please share at least one piece of advice with our readers.

SK : My whole life I have searched for a place to call home and every place I’ve lived I’ve started with the hope that the new place would be it. I’ve had to let go of that expectation as well as many others in exchange for just living my life day to day and letting the future plans reveal themselves as they tend do.

Unlike other places where I had many local friends and felt much more welcomed into my host country, I had to let go of that expectation since I’ve been in Prague. This is a hard place to break into socially and even if I were here for 20 years it still may not happen. I’ve found moments of comfort and support from fellow expats both here and online, which is something I always shied away from in other places I’ve been a foreigner.

I’ve come to appreciate the fact that in spite of never having thought I would ever say this, moving back to the USA may not be the worst thing in the world. I think a lot of expats go through this dilemma: We left our home countries for a reason and the thought of returning is sometimes not a positive one. In the end, every relocation is what we make of it, and not everyone is destined to forever be an expat. Realising that sometimes it is the right thing to return home, in spite of all the difficulties that might entail, could be a step (or flight) in the right direction.

Then again, maybe in the meantime my mom will finally get her Lithuanian passport and I’ll live happily ever after in the south of France.

OS : Do you have any expat blogs or websites (any 2) that you would like to recommend?

SK: The expat+HAREM is a brilliant collection of writings from around the world. Glimpse features all kinds of travel and living abroad stories, as well as having interesting writing competitions on a regular basis.