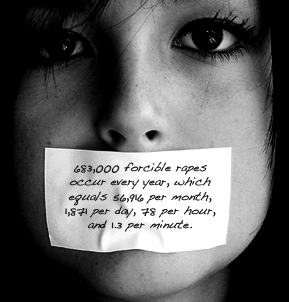 In November 2010 an 11-year-old girl was gang raped by 19 boys and men, aged from 13-27, in a small town in Texas. On March 8, 2011 the New York Times broke this story after a teacher in the little girl’s elementary school saw a camera phone video of the rape that one of the other students possessed.

Instead of treating this disgusting brutalisation of a child as a heinous act, the New York Times proceeded to blame the victim through choice quotes from Cleveland residents, painting a picture of the girl as dressing older than her age, hanging out where she shouldn’t have been and even blaming her mother for not keeping a better eye on her. The New York Times defense is that they took no stance in blaming this gang rape victim, they merely reported what the residents said.

Really?! That’s their excuse?! So there was absolutely nobody in Cleveland who could take a level-headed view of a child’s gang rape? No police they could talk to? Maybe the teacher who saw the video? The school counsellor?

The fact that William McKinley and his editors CHOSE to print the quotes they did and structure the entire story around how terrible this must be for the rapists and pedophiles is evidence not just of the rape culture within we live but also the fact that the media is as Mother Jones magazine writes, “rape-friendly”. The fact that these insensitive and inappropriate choices slipped through the editorial cracks is proof positive that the New York Times, its writers and editors, think that an 11-year-old child can be held responsible for the actions of 19 rapists.

The Rumpus Magazine, in its “The Careless Language of Sexual Violence”, details the physical and emotional aftermath of a gang rape as follows (emphasis mine):

Being raped by one man is a real life horror movie. Being raped by 19 of them, while you are a pre-pubescent child, is unimaginable. Reading that the New York Times told the world that it was your fault is an unspeakable horror. Rape is never ever, no matter what the circumstances, ever a girl or woman’s fault.

I can’t do anything to help this little girl with all she must be going through and will for the rest of her life.

But I can withdraw my support from the New York Times. And I hold every single person who works there responsible for the heinous blaming of a child for her gang rape.

Nobody on the New York Times staff spoke out against this journalistic atrocity. Nobody called for the resignation of the man who so insensitively put together choice quotes that lay the responsibility of this crime in the hands of the brutalised child, or his editor who let that disgusting article go to press, or his editor and so on. Their response has been pathetic, at best, and worse it hasn’t even bothered to address the issues at hand or apologise to the little girl who has already been through too fucking much.

Since this story sent shockwaves through my heart and body, I am boycotting the New York Times.

As a writer and researcher I spend a great deal of my day reading articles, blogs and books, much of this online. I refuse to bring rape apologists into my cyberspace. You’ll notice I’ve not even linked to the actual New York Times article.

The New York Times have come to represent so much of what is wrong with this world and its pervasive hatred of women and girls. The New York Times is the mirror of our diseased society that panders to male perversity at the cost of female humanity.

An article published yesterday by the Houston Chronicle divulges there were actually four separate incidents in which this little girl was gang raped between September 1-December 1, 2010. My guess is the perpetrators wanted to keep her scared enough to not go to the police. Well done, perverts, she never did.

Anyone with post-traumatic stress disorder knows that after a trauma the biggest fear is that the event will happen again. I cannot begin to imagine the terror this girl lived in as she literally relived her nightmare over and over. I don’t want to imagine the physical and emotional devastation she will carry with her for the rest of her life.

My prayers are with that child, and her family. I pray that she finds a way through this, a way to put the pieces of her life together and move forward. I pray that she never goes through anything like this ever again. I pray one day she will be able to trust a man and revel in the beauty of a consensual relationship. Most importantly, I pray for her physical, emotional and spiritual healing.

As for her rapists: I recommend castration.

©Sezin Koehler, image via A Place To Talk About Rape

11 thoughts on “Suffer The (Girl) Children”