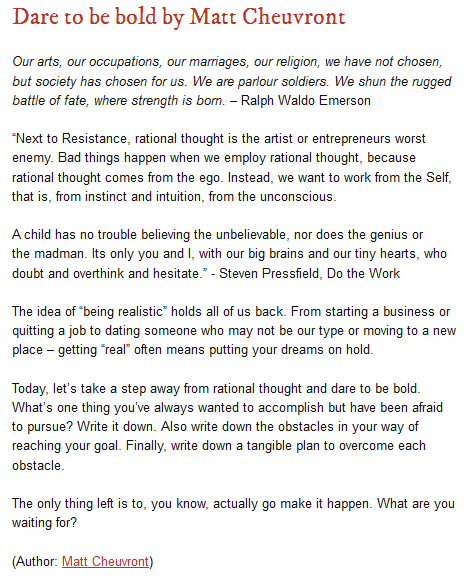 My dream has always been to be a writer.

For the last two years, with the support of my husband, I’ve stopped working full-time so I could be at home in the mornings to write.

2009 to 2010 was absolutely amazing. I jumped right into Twitter, started “building an author platform” without even knowing I was doing it, self-published a novel I had written ten years ago and even manage to sell copies to people I had never met in person.

In the meantime, I started guest posting at different websites, again not knowing that this is now a well-known part of getting one’s name out into the reading world.

I continued with my blog. I networked on Twitter, LinkedIn and Facebook. I ended up making some incredible friends, some of whom have crossed over into real life friends and even extended family.

Late 2010 to 2011 has proven a lot tougher, with the exception that my novel, American Monsters, was picked up by Ghostwoods Books and a new, revised, expanded and illustrated will be released later this year.

Prague is an expensive place to live, and with only one and a half incomes, we started to feel the strain of finances. My part-time job began to be more of a hindrance than an escape; conflicts arose that spilled over into my creative time. Memories of being bullied as a child came back full force. The brutal winter depleted my energy and a near-death experience on a tram shook me to the core.

Now, when it comes time to leave the house for my part-time job I am filled with dread. The close quarters of trams make me uber-claustrophobic in a way I never was before the Blizzard Incident. When it comes to writing, right when I start to feel an American Monsters in Los Angeles or American Monsters in Prague groove getting on, OOPS, look at the clock it’s time to get ready to commute across town and deal with anywhere from 30-60 children aged 3-9. Intense, exhausting, as mind-numbing as the tummy pain I was in last week.

We are leaving Prague in two months, that is a given, and I am ever-grateful to get out of this place. But we still don’t know where we are moving.

Some of our options would require me to work outside the house part-time as I do here, some would require two full salaries to make ends meet. Others could offer my husband a great enough salary that not only could I stay home and write full-time, we could still save money, and travel, two things we have never been able to do while living in Prague.

The rub is that the better options for me to live my dream as a full-time writer come with caveats: Istanbul, one place we have our eye on, is trying to pass stricter Internet censorship laws that could potentially hinder my ability to do what I need to do to maintain the author platform I’ve been building these last two years as well as access to the information I would need to actually write. Any writer knows that research is a huge part of writing, and without access to YouTube, or Google Books, etc., my efforts are curtailed in a big way. This weekend heralds the general elections in Turkey where the fate of their Internet freedom will be decided.

My newest guest post for the expat+HAREM talks about how we are closer to the American Dream living and working outside America, but if all else fails that is a sort of “home” we could return to. However, it’s the last place on our list: Who knows how many jobs both of us would have to work in order to maintain the basics of food, health insurance, transportation, the bulk of those which are provided by socialized infrastructures elsewhere.

So much is up in the air right now, and the stress mounts every day that moves closer to our departure from Prague to parts unknown.

Honestly, thinking about my dream of being a full-time writer makes me feel sad more than anything at this point.

I know what I need: A Zuzu Cave into which I can withdraw and write, without distraction, all the books that are knocking about in my head like boomerangs.

I don’t like big crowds of people. The day to day game of office politics does not agree with me. I prefer to carefully curate those I spend my time with, rather than being thrown into the hodgepodge of drama, insecurity, and cliqueness that accompanies most places of work. I would rather go out into the world when I choose to, not because I have to.

The obstacles to the Zuzu Cave are plentifold. Overcoming them is completely out of my control at this point. My heart breaks a little. Well, no, it breaks a freaking lot, it crumbles. I can’t breathe thinking about it.

My reality is overwhelming, and until that is under control, there is no room for imagining my life as a full-time writer: there is a chance that where ever we end up won’t allow for it. I have to find a way to be okay with that possibility.

A dream deferred is a total fucking suckfest. But unlike Langston Hughes, I don’t believe unlived dreams wither like raisins in the sun. I believe they go into hibernation until the conditions are right.

6 thoughts on “Dare To Be Bold”