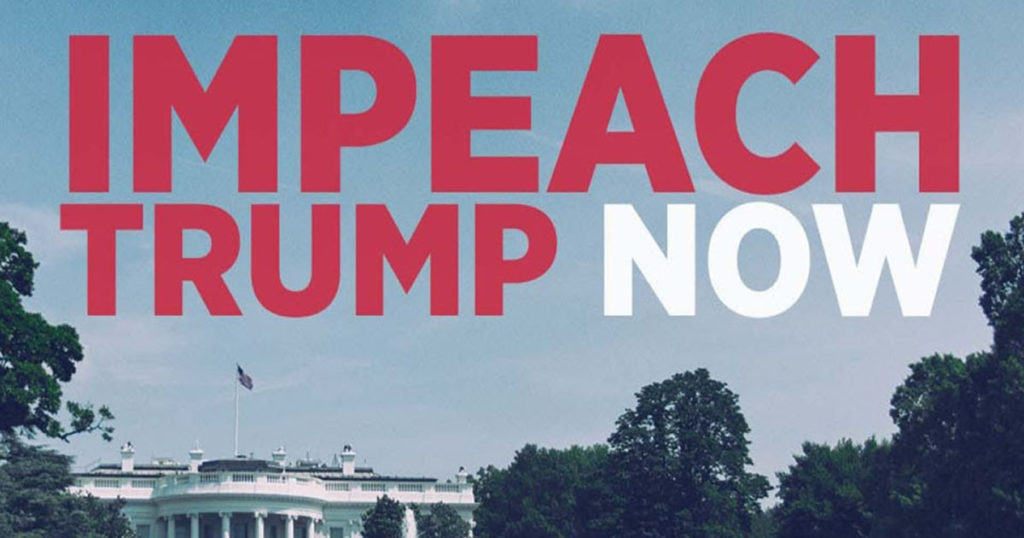 Impeaching Trump could actually set off a stream of unmanageable events.

Every single day we find ourselves ever deeper down the white nationalist rabbit hole represented by Donald Trump’s regime. I thought that the deadly Nazi rally in Charlottesville would have been the upturn point where we began digging ourselves out of the shit, instead Hair Führer refused the path of decency and the bottom dropped out from under us again.

Trump’s unwillingness to properly disavow American Nazism is not surprising; that is his base after all. In the wake of this new showing of America’s true colors, the fever pitch of hysterical calls for Trump’s impeachment are flooding all avenues of media. Hate to break it to you folks, impeaching Trump — as satisfying as it might be — will not be the end to the growing conflicts in this country. This kind of magical thinking is extremely counterproductive to the work that needs to be done from the top down in dismantling white supremacy in America.

This problem of white nationalism is bigger than just Trump, although he was a “yuge” fomenter since he began the so-called birther movement about our first black president. Trump has come out and said all the things that disgruntled white people have been thinking for years. These white people are angry at their perceived loss of white power, and they are armed to the teeth. As our editor, Lara Witt wrote for Harper’s Bazaar, this white supremacy is deeply entrenched into the fabric of American society.

Trump has undermined all our judicial and governmental systems of checks and balances; he has eviscerated the credibility of the free press and elevated propaganda factories. He has problematized the very notion of truth, facts, and science through his “FAKE NEWS” bloviating. He has shredded fundamental fabrics of reality in America in favor of trigger happy, often uneducated, and fundamentally bigoted world views.

Removing Trump from office through impeachment proceedings might very well trigger an actual and large-scale armed conflict in the USA between these white supremacists who hail Trump as their supreme leader versus all the rest of us. You can’t un-kick a hornet’s nest.

If Trump resigned, that might be a different story. But from everything we know about the man, he can’t even muster an apology for the hundreds of lies he has told just during his presidency. This is not a man who is going to step aside gracefully. He might even call on his white supremacist lap-dogs outright to take up arms if anyone threatens to remove him.

But even if Trump were impeached and went quietly, who is next in line? Mike Pence is already laying groundwork for a presidency that will be just as racist and misogynist as Trump’s regime in his support of the white nationalism evidenced in Charlottesville: “I stand with the president and I stand by those words.” The man who believes torturing gay people is the will of God and is so sexist he won’t have dinner with female colleagues may comport himself more presidentially if the reins fall to him, but he is just as morally corrupt as Trump. Pence is an opportunist at best, and an evangelical hypocrite at worst. This is not a man we want running America either, and he will do just as little as Trump to stop the incidents of racially motivated and other violence.

Paul Ryan would be next in line, and he’s no better than his predecessors. This is the man whose college wet dream was to get rid of Medicaid.

All the way down the line of Republican successors are exercises in hypocrisy and corruption.

And in many ways, impeachment proceedings would only further entrench the false narrative of white political dispossession that is the theoretical basis for this uptick in American Nazism.

According to Marisa Kabas, of 292 Republican representatives only 24 have denounced Trump’s behavior and comments surrounding the Nazi violence in Charlottesville. It has been nine days.

It is time for everyone to internalize the fact that the Republican Party is morally bankrupt. Either they agree with the white nationalist upsurge, or they are prioritizing their corporate overlords over American voters. Likely a bit of both. If you are waiting for them to do the decent thing, you will continue to be disappointed. They have sold out America for their own personal benefit, just like the man who holds the presidency. They wouldn’t know how to do the right thing if it hit them in the face, and it’s hitting them every day they do nothing. They will never impeach Trump.

The magical thinking that somehow impeachment will solve America’s Nazi crisis needs to stop. Here are some solutions we need to begin working toward instead from short to long-term:

– Remove all racist statues across America. Quietly, like Baltimore and others have being doing. There are no statues commemorating Hitler in Europe, only memorials to his victims and survivors. We need to follow suit in America.

– Nazism needs to be criminalized. We need an effective and zero tolerance policy for white nationalism.

– FOX News needs to be taken off air. This propaganda machine is a huge reason racism is so out in the open now. Their lies feed white hatred. Stop giving them a platform. This is beyond free speech; this is incitement to racial hatred and violence.

– Release BIPOC in prison on marijuana charges in decriminalized states immediately. Fill their spots with Nazis and other violent sympathizers.

– End lifetime salaries for politicians and make sure that politicians get the same healthcare as their constituents. They will start acting for the people again once they are reminded they are one of us.

– Keep up the protesting and regularly calling your government representatives.

It is not enough to remove Trump alone from power. Everyone who agrees with him — or has stood by his regime even if they don’t — need to be stripped of all political benefits and replaced by Americans who actually care about the good of this country and all of its citizens without prejudice. Only then we can start rebuilding America from a cleaner, more honest, and aware house.