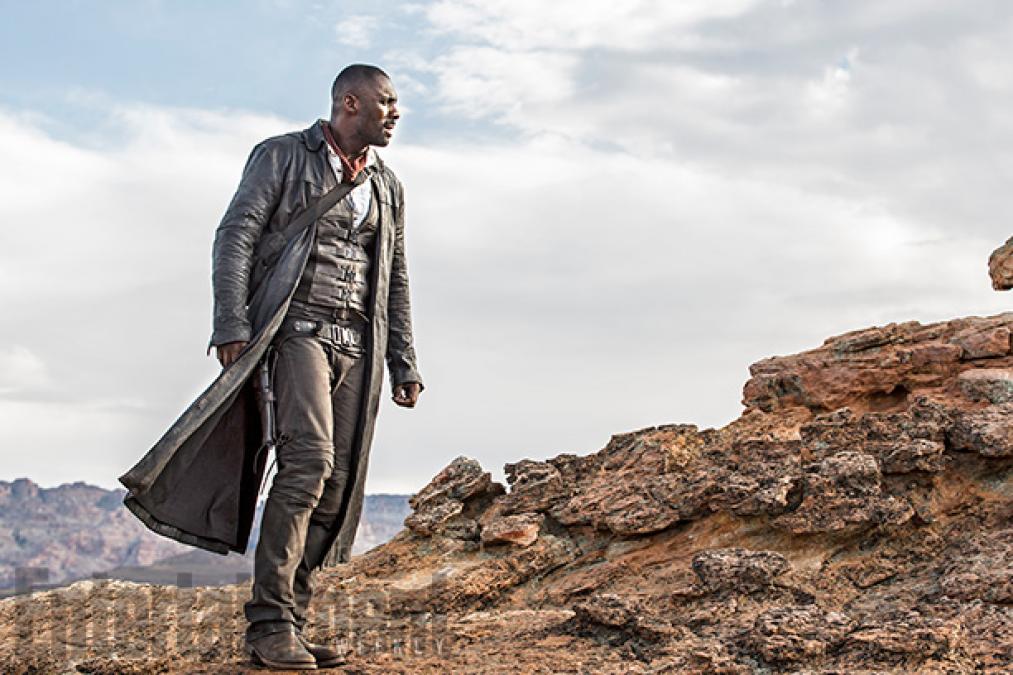 The Dark Tower is easily the largest step I’ve ever seen in a fantasy sci-fi film towards equitable representation on screen — other than the new Star Wars installments.

*This is a spoiler-free review.*

The man in black fled across the desert, and the gunslinger followed.

Based on Stephen King’s epic spaghetti-western-inspired fantasy series about a battle to save the universe, The Dark Tower opened on August 3rd with a special 19:19 (7:19) showing for all us die-hard fans. The production might have been beleaguered over scripts and directors, delaying the release over the past few years, but its unfurling on screen was like watching an amazing dream come true.

Idris Elba is Roland Deschain, the inimitable last gunslinger of Eld, and Matthew McConaughey is Walter O’Dim, the villainous man in black whose sole purpose and desire in the world is to end it — theirs is an ultimate battle between forces of good and evil in a Mid-World that straddles many others, including Earth.

For full disclosure, I’ve been a huge fan of the Dark Tower books for decades and have read the entire series more times than I’ve read Harry Potter. While not a fan of westerns, guns, or certain strains of the fantasy genre at all, something about King’s expansive and beautifully written vision of Roland and his nemesis has kept me in its thrall all these decades. When I learned that the production decided to racebend Roland Deschain by casting Idris Elba I thought I was going to have a heart attack and die before ever even getting to see it all play out on screen. I am so grateful that I didn’t: The Dark Tower is hands down one of the best movies I’ve ever seen, and not just because I was already predisposed to loving it.

Idris Elba’s performance as the gunslinger is equal parts vulnerable and badass. His raw physicality, especially as he towers over all his castmates, brings an appropriate grandeur to his role as the last in a long line of gun-wielding knights who are descended from the equivalent of King Arthur. Elba’s Roland is a man lost in a Midworld that has moved on.

Consumed by his desire for revenge against the Man in Black, he has forgotten the face of his father as he engages in a futile chase to hunt and kill his sole enemy. He has abandoned his oath as a protector until the young Earthling Jake Chambers (Tom Taylor) enters his life and changes its course entirely. I cannot wait to read the books again to picture this new Roland, with his quiet power and sad eyes. Elba should be nominated for all the awards; he is perfection embodied. I mean, he kind of always is, but here he’s extra in the best way.

Matthew McConaughey’s sleek work as the Man In Black is the perfect foil to Elba’s Roland and adds several levels of timely and important socio-political commentary. Walter O’Dim is one of the few pure villains who has ever existed — he has no childhood or other trauma that makes him the monster he is — and he’s a destructor for destruction’s sake. The Dark Tower is a magical construction that holds together all the worlds, and Walter is kidnapping exceptional children in order to harness their power and destroy it, along with the kids.

The Taheen, Walter’s army of grotesque animal hybrids who wear human skin suits, serve as footsoldiers and accomplices to the man in black’s evil machinations and provide him with the fresh blood he needs in his quest to destroy the world as we know it. In light of Donald Trump’s recent Hitler Youth reminiscent speech to The Boy Scouts of America, the idea of weaponizing children is a particularly apt social commentary on our own Keystone Earth. Trump and his regime have no qualms about radicalizing white children in their new nationalistic project, as well as further marginalizing children of color. I’m looking at you, Betsy DeVos.

The social commentary does not end there. When telling young Jake about his fight to save the Dark Tower Roland says, “What happens in one world affects them all.” As the Man in Black lobs children at the Dark Tower to annihilate it, the ripple-out effects are met with beamquakes on Earth. Even in alternate universes, we are still all bound by the laws of physics and connectivity, even if we don’t want to acknowledge it.

In yet another eerie parallel to The Trump regime and their American isolationism, the Man in Black and his monsters are interested in tearing apart the universe’s order for no reason other than because they have the power to do so. I couldn’t help but think of Steve Bannon’s comments about his ultimate goal in the Trump administration of destroying the American state as we know it. The purposeless chaos caused by the Man in Black is what happens when power gets consolidated into too few individuals and subsequently goes unchecked. That sounds scarily familiar as chaos in The White House deepens each day.

And isn’t it amazing that in The Dark Tower we have a white man in a black suit who plots the ruination of life as we all know it, and the world’s only salvation is a black man? This is a story for our current times indeed. #BringBackObama

While there was so much about this film that I loved, including the dozens of Easter eggs for us long-time Dark Tower book fans, arguably my favorite thing was the incredible show of diversity in the casting. On second viewing I’ll be sure and do an accurate tally, but I estimate that roughly 50% of the film featured people of color in prominent roles, NOT including the scenes with Elba as Roland. You read that right. People of color in non-stereotypical roles have an abundance of speaking parts onscreen. And not just in naturally diverse New York City either.

In the parallel universe of Mid-World, the one human settlement we visit is filled with people of color. One of the leaders of that camp is a black man, whose partner is a white woman, and they have a little brown baby. An Asian woman plays a key role in Roland and Jake’s struggle. And ironically, the majority of the monstrous Taheen army have elected for white skinsuits. What a powerful statement they have made with this film.

All of its other brilliance aside, The Dark Tower is easily the largest step I’ve ever seen in a fantasy sci-fi film towards equitable representation on screen — other than the new Star Wars installments. This is me giving The Dark Tower a standing ovation. I hope this is the first of many, many installments, just like the books.

P.S. For the long-time fans, here’s a juicy theory about the film to nosh on before you go see it.