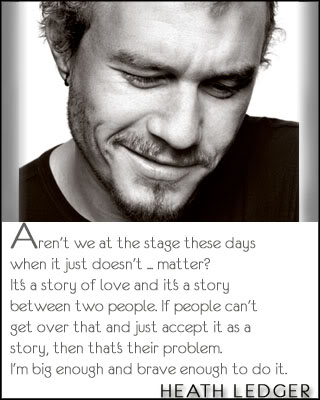 I always felt a strange and strong connection with Heath Ledger. It became even stranger and stronger when I found out that he has almost exactly the same birthday as me. Same day, month, year and almost the same time even. I felt it was some sort of sign. When I found out about five or six years ago that we were both brought into this life at more or less the same moment, this is what I thought about:

When I moved to Los Angeles it was to be a movie star. After a few months of getting my feet wet in the city, I realised that I simply didn’t have the determination and thick skin it takes to get involved in that very (for the most part) shallow of industries. I came to that fork in the road and took it down the path of Anthropology, which in turn led me to my work at the UN, my life in Europe and many other amazing and tragic experiences I really wouldn’t change for anything. All the while, I would watch movies and see performances and wonder about that other life that I could have had if I had not given up on the actor path.

When I found out that Heath Ledger, the extremely talented film star, and I were brought into this world almost exactly the same time I distinctly recall the feeling of peace that came over me. It was like he was living the life that had once been my dream and instead of feeling jealous or sad that I never had it, I was able to let go of that dream because someone whose soul and spirit was connected to mine in a very odd way was succeeding and thriving in that very same dream. When he was nominated for his Academy Award for Brokeback Mountain I felt so proud. I remember in high school how people were so sure that would have been my path one day, and indeed it was my desire for so very many years. I always wanted to be in a Batman movie and Heath just finished wrapping up his brilliant take on The Joker in the new Dark Knight film.

This morning, when Steve told me he had died some time during the night … I don’t even have the words I need to describe how I felt when I heard the news. Shocked, I suppose, will have to suffice. It’s like a small part of me and my dreams died with him. Maybe it sounds stupid, but I believe in these connections, and I believe they mean something even if only just to me, and even though they may be distant and surreal in a way, they help me live my life better and they bring me some measure of peace. And now he’s gone. I feel devastated.

They don’t know why he died. They suspect it was an accidental overdose of his sleeping pills. He had been travelling non-stop and had just returned to New York. Apparently, like me, he had always suffered from insomnia and also had some kind of respiratory infection to boot. What makes me even more sad is that he was dead in his apartment for hours before his cleaning lady and masseuse found him. Just lying there, cold and blue, on the foot of his bed. Alone.

As upset as I am right now at the loss of yet another young and phenomenally talented person, I do feel comforted in a way knowing that at least Wendy wasn’t alone when she died. There are so many awful things happening right now in this world, and part of me feels so selfish to be upset about this. But still, the thought of someone so special with so much to offer this world in beauty and creativity was left to die alone. It breaks my heart.

In reality, I suppose my heart breaks every day that I watch the news and hear about the horrific things going on in the world. Today just happens to be a day where I am inspired to weep for not only Heath, who I hope will visit me one day, but for all of those who have been untimely lost. I dedicate these tears to them.

I send my prayers to his family and friends, whose devastation I can only imagine.

Wendy, when you get to meet him tell him I say hi and i miss him already, okay? And have him give you a hug for me, too. Life is not the same without you.

Why Are Awards Shows Still Even A Thing?
Loading Comments...