My introduction to Ethiopia and its cuisine was in a Rastafarianism, Reggae, and the African Diaspora course I took in university. What struck me the most was learning that Ethiopia had never been colonized, and is one of the few African nations never to have been. Not for lack of trying, mind you. The Italians tried, the Eritreans tried, others toyed with the idea, but always failed. One lesser known theory to explain this phenomenon is that the Arc of the Covenant is hidden somewhere in Ethiopia, and its power has protected Ethiopia’s sovereignty in a major way. Ethiopia is also said to be the place from where the first homo sapiens migrated and began to populate the rest of the planet: humanity’s Motherland. 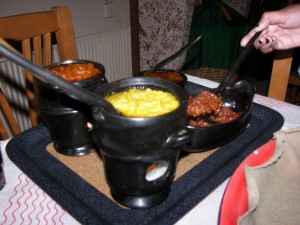 Years after taking that course, I finally had the opportunity to eat Ethiopian food, and it changed my life. Ethiopian cuisine is not only a magnificently blend of spicy, comfort food served on sourdough-like flat bread for scooping wonderfulness, I also believe that it is magic food. Literally, magic. Here’s why: After a good friend was murdered, I was seriously traumatized, and months worth of the constant adrenaline surges from post-traumatic stress disorder had begun to wreak havoc on my central nervous system. I became allergic to everything and was forced to have a strictly rice, beans and veggie diet if I wanted to be a non-hivey and non-generally uncomfortable person. However, if I ate at the Ethiopian Restaurant (Berkeley, California) I could eat anything I wanted, including meat and Ethiopia’s gorgeous honey wine tej, without the slightest symptom. Not a one! Magic food. 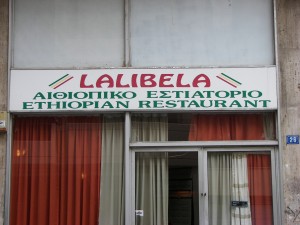 I later found out that the grain used to make the glorious flatbread, on which the saucy goodness of the dishes is doled out in careful bursts, is only found in Ethiopia. My theory is that the Arc of the Covenant has not only protected Ethiopia from invaders, but its power has also seeped into the land itself and thus into the food, making Ethiopian dishes magical. But it’s more than just magical. Unlike many Western modes of eating and sharing a meal, the Ethiopian experience is a communal one, where a meal will last hours and the entire family sits together eating off a very large plate almost the size of a table for four. You tear off some injera, use it to sample of the variety of meat, bean and vegetable delightfulness, talk, eat, drink, and eat some more. It is not uncommon for patrons in Ethiopian restaurants to spend three or four hours enjoying their food.

Since there is no Ethiopian food in Prague my husband and I recently went to Athens for Ethiopian, his first time ever and my first time in three very long years sans the beautiful wonder-food. The Lalibela Restaurant was tucked away in a residential neighborhood that wasn’t even on the Athens map. When we arrived, we were treated like family, especially since I mentioned to the owner’s sister that Ethiopian food is my most favorite and I hadn’t had it in three years. When they saw that I wasn’t joking, and that I was well versed in how to serve out the dishes onto the injera, and how much I loved it literally to the point of tears, they invited us to an Ethiopian coffee, another aspect of the food I had never tasted before. 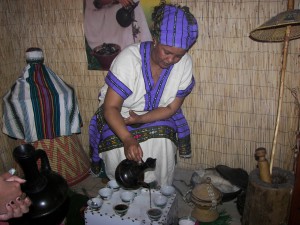 First Elizabeth showed us the green coffee beans, then 20 minutes later she brought out the roasted beans on a skillet for us to smell, then 30 minutes later out came the coffee served in a gourd. It was The Best Coffee I have ever had in my life. Smooth, flavorful, and naturally sweet, I didn’t have to add any sugar at all. Not to mention, it didn’t make me crazy jittery like pretty much all other coffee does. Like I said, magic food.

Before leaving Athens we returned to Lalibela once more, and this time they once again invited us to the coffee after our amazing meal, but we also got a demonstration of how Ethiopian women spin thread and weave textiles. After our coffee, they gifted us with scarves that had been woven from scratch by the family. Can you imagine? Our recent Ethiopian experience sums up the joy that is Ethiopia, its food and its people. Their great hospitality, their generosity, their grace and their talent. It is a way of life and relating to people that is sorely missed in much of Europe and North America. 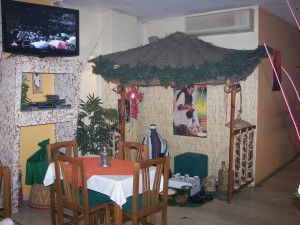 Like opera, Ethiopian cuisine is a singular experience: If you love it, you will always love it, you’ll crave it, and you will seek it out even travelling long and far to find it. In fact, for Ethiopian food lovers there is even a website called Ethiopian Review that compiles addresses and reviews of all of the known Ethiopian restaurants from all over the world. If you have never tried Ethiopia’s magic food, then you can use this website to find one near you at least to try it once. If you love it, you’ll become a part of the shared Ethiopian conciousness. Even if you aren’t taken with the spirit of the food at least you can tell people that unlike popular belief, there is indeed food in and from Ethiopia, and it’s delicious.

Also a special thanks to Anastasia Ashman for her World Blog Surf Day Tweets (Twitter handle: Thandelike). She is an American cultural producer based in Instanbul, and is a creator of Expat Harem, the anthology by foreign women about modern Turkey. Her Tweetstream focuses on women, travel and history, and she shares resources for writers/travelers, expats, Turkophiles and culturati of all stripes.