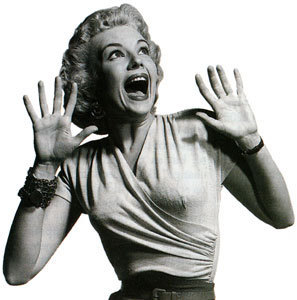 In a recent debate about women’s literature, two British writers polarised women’s popular writing styles into “Misery Literature” and “Chick Literature”. The so-called misery lit is classified by women dealing with bereavement, rape, and child abuse. The chick lit is classified by Prada handbags and the search for romance, sex or both.

Daisy Goodwin’s comments about rape were phenomenally inappropriate: She says she’s sick of women opening novels with rape and wants more “foreplay” in a story. Wow. I’m sure all of the rape survivors out there would absolutely have loved some “foreplay” too. However, I can’t be overly surprised that such a callous individual would be on a panel of judges; being a jerk comes with that territory. I am, though, surprised such tasteless comments would come from a woman.

On the flip side of the debate, Jessica Duchen points out that women may be tending towards more and more grotesque misery lit to make 110% sure nobody mistakes their work for the fluff of chick lit. With this, I absolutely agree.

I found this debate fascinating since my first novel, American Monsters, is a horror novel, but with shades of feminist dealings with issues such as violence against women, misogyny, and how women speak and act back towards the violence acted against them.

American Monsters has all shades of violence against women – rape, incest, medical malpractice, and more. However each of the women responds by developing a superpower that will prevent her from ever experiencing that kind of trauma again or protecting another woman from going through the same. One woman develops a vagina dentata, another develops a silent scream that she can point at her abusive husband, another who develops a taste for testicles with fava beans and a nice Chianti.

While my novel does come into a world that seems to value Stephenie Meyer’s conservative Twilight manifesto, American Monsters is a far cry from it. With all of the Twilight and True Blood hype, horror stories for women seem to being going in the direction of chick lit, something I see as a contradictory phenomenon. Horror has always been the pulsepoint of what society fears, which tends to be women, their natures and association with the physical side of life. Subsuming horror into chick lit frightens me, as it tells me the shades of reality present in horror stories are being glossed over from the actual to a cutesy re-invention.

For example, the sexual violence against a teenage girl in the Twilight novels masquerading as true love is more disturbing than even the scariest Stephen King story.

Horror is a borderland, both in reality and in fiction. Horror is the place where nightmares are real, the terrors of our pasts awaken and hide in dark corners to say “BOO!” unprovoked. Horror is the place where we can take the difficult things that happen to us and do something different, or simply heal through the re-living of that terror, excorsising it from our souls bit by bit. Horror helps us unpack the pain, suffering, trauma so that it stops having such a detrimental hold on us.

Maybe “true” horror stories are the in-between space where misery lit and chick lit can meet, to create stories of empowerment for women. This could also be a space where women speak back to the male versions of what is scary, monstrous, and powerful. Horror could be a viable alternative to both misery lit and chick lit, giving us the opportunity to re-imagine worlds where women find new ways to deal with trauma, partnerships and equality.

Where do you see women’s literature going?