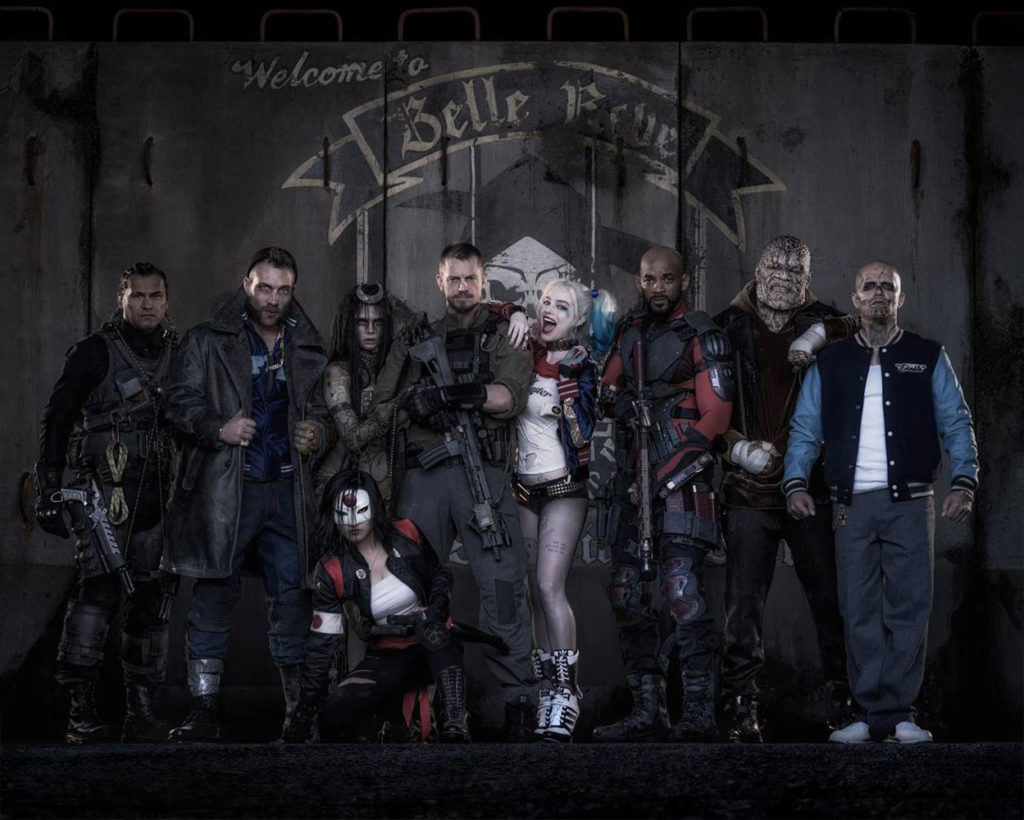 Much like 2016, Suicide Squad started out with so much promise. Great cast, interesting characters including a cadre of weird antiheroes, exciting plot, with a whole lot of potential. And then somewhere along the way, everything went pear shaped *Cough* David Bowie’s death *Cough*.

I’ve been waiting for months for Suicide Squad to arrive on my on-demand service, which it finally did last week. In spite of all the bad reviews, I love me some superhero movies and thanks to the power of the film’s snazzy branding, still thought there might be hope. But like pretty much everything in this garbage year of 2016, my hopes were bashed over the head until all that was left was a stain on the wall.

How could a production go so entirely wrong as Suicide Squad? It’s almost impressive how they screwed every single thing up, from character development to costumes even, and the rampant racism, sexism, and glorified extreme gun violence were beyond the pale. And Suicide Squad is yet another of example of just how far we still need to go in terms of appropriate mainstream representation of people of color and women. And in the context of Donald Trump’s America, all these missteps take on a new kind of horror.

Will Smith’s assassin with the subtle moniker of Deadshot and Viola Davis’s ruthless Amanda Waller – probably due to their particular star power – mostly escaped the poor treatment of their fellow POC’s and women in the film. However, it was still disturbing to watch Deadshot, a black man, pull a gun on a little girl, who was his daughter no less. This is not a healthy image to insert into an already-fraught racial consciousness in America, and especially during this particularly grotesque resurgence of the Nazi party rebranded as the “alt-right.” Further, when Deadshot displays his shooting prowess to Waller and Company, a song repeating the word, “God God God God,” plays over his hail of bullets. Not cool, creators. Not cool at all.

Native actor Adam Beach plays Slipknot, and one of his few lines comes after he punches a woman in the face because, “She had a mouth.” Five minutes after this brutal display of misogyny, Slipknot is killed trying to escape, and is the only member of the so-called suicide squad who does. To add insult to injury, Slipknot doesn’t even get the same kind of introduction as every single other member of the Suicide Squad. UGH.

Diablo (Jay Hernandez) is a walking cliche as a heavily tattooed Latino gangbanger who happens to be pyrokinetic. Diablo is a mass murderer who killed his own family, and I have a new hatred for when a fictional narrative fits into Donald Trump’s incitements to racial violence and false assertions such as “[Mexicans] are bringing drugs. They are bringing crime. They are rapists.” Again, Diablo’s character enters perilous cultural territory in this moment in American history where stereotypes are being treated as truth.

Killer Croc was an absolute waste of Adewale Akinnuoye-Agbaje’s talents as the entire character was CGI, making him one of two black characters whose actual faces were lost into digital imagery, the second being The Enchantress’s (Cara Delevingne) brother played by Alain Chanoine who was quickly replaced by pixels.

The Samurai chick Katana (Karen Fukuhara) is another walking cliche: a mostly-silent Japanese woman with a white dude boss who speaks for her almost the entire movie. At the end she reveals she’s spoken English all along. Oy vey.

June Moone and her alter-ego The Enchantress are presented as those old and familiar sexist foils, the virgin and the (half-naked) crone. As The Enchantress, her body is covered with only three small pieces of fabric over her breasts and crotch, and yet when her brother takes on physical form, he is fully dressed. Misogynistic double standard much?

The fact that The Enchantress and her brother are defeated feels like a metaphor for the patriarchy: complex, strong, powerful women must die, and women who toe the patriarchal line like Harley Quinn live. That said, The Enchantress is still highly sexualized as she kisses her victims in order to transform them into her army. So gross.

Watching Harley Quinn (Margot Robbie) prance around like Negan with her baseball bat, her ass hanging out of her shorts as she is continually ogled by every other male character was tiresome before it even began. Her petulant quip, “I sleep how I want, when I want, and with who I want,” is a kind of faux feminism falsely indicating female agency while everything else about her character development caters to her sexual objectification. She wears stilettos into battle, for Pete’s sake. I would still like to know how she manages to have hairless and smooth armpits while in maximum security prison. It makes sense only in the context of further sexually objectifying her for the consumption of the male gaze.

And let’s be honest, this entire movie is geared towards the kind of white male gaze that Trump appealed to with his “grab her by the pussy” comments and others. Suicide Squad appeals to that same lowest common denominator with cliche upon cliche and stereotype upon stereotype. Trump’s similar rhetoric has sparked the staggering resurgence of Nazism and white nationalism we see in the wake of his Electoral College win.

If this is the direction DC Comics plans to go for future canon films then that’s a hard pass for me. I can only imagine how painfully sexist Harley Quinn’s standalone movie will be if her treatment in Suicide Squad is any indication. Ain’t no feminist got time for patriarchal women who have internalized their own oppression and self-hatred — Harley Quinn sure likes to use the term “pussy” when referring to her colleagues — all the while finding every reason to bend over with her ass in men’s faces.

Arguably the most troubling aspects of the film from a gender perspective stem from Harley Quinn and her relationship with The Joker (Jared Leto) which can be described in one word: ABUSIVE. The Joker tries to kill her multiple times and in the process drives her crazy and further entangled in his violence to the point where she becomes the masochist to his sadist. “I’m not going to kill you,” Joker tells Harley the first time he mortally wounds her physically and mentally, “I’m just gonna hurt you really, really bad.” Harley replies, “That’s okay, I can take it,” as she’s already enmeshed in their sadistic psycho-sexual relationship. He even makes her say please before she throws herself into a vat of boiling liquid. After all the abuse, in the end Harley literally jumps at the chance to return to her abuser.

Harley’s shirt “Daddy’s Lil Monster” took on a sinister turn as I wondered about whether she’d been abused in the past. She fell into Joker’s thrall a little too quickly, suggesting being in an abusive dynamic isn’t new to her.

Disgustingly, the Joker+Harley pairing in Suicide Squad is presented as romantically edgy, and is a dangerous normalizing of abusive relationships and sexual violence, which often translates to actual real-life danger to women’s lives. When we put this kind of normalization of abuse into our current political context it becomes even more insidious, and especially as we watch the media normalize Nazi propaganda and Trump’s dismantling of the current world order in favor of one that is more profitable to him and his white nationalist cohorts. At this point in history, any kind of normalizing narrative — whether about abuse, racism, xenophobia, sexism, etc. — needs to be rejected and immediately.

Leto’s Joker reminded me of Trump’s sons over and over again, from the way he’s combed back his hair, his fetish for tacky gold jewelry, his narcissistic disregard of everyone but himself, and his itchy trigger finger that strikes without provocation (Trump’s sons prefer killing endangered animals, but you get the point). Yes, these are all traits that The Joker has always had, but with these particular costume and design choices they do not come across as the same. In a nutshell: this Joker is deplorable.

I can’t believe these next words are going to come out of my fingers: Ben Affleck’s Batman was the best part of this garbage movie. I am not a fan of him in anything, so this is really saying something.

The worst part is that I have zero hope for any improvement in this franchise, or any other problematic one, at this current moment in global politics. With Trump’s new world order of open Nazism, racism, xenophobia, misogyny, Islamophobia, and more, I fear that visual media will begin normalizing all these attitudes in the same way Suicide Squad normalized an abusive relationship. And that thought is as terrifying as this movie is terrible.