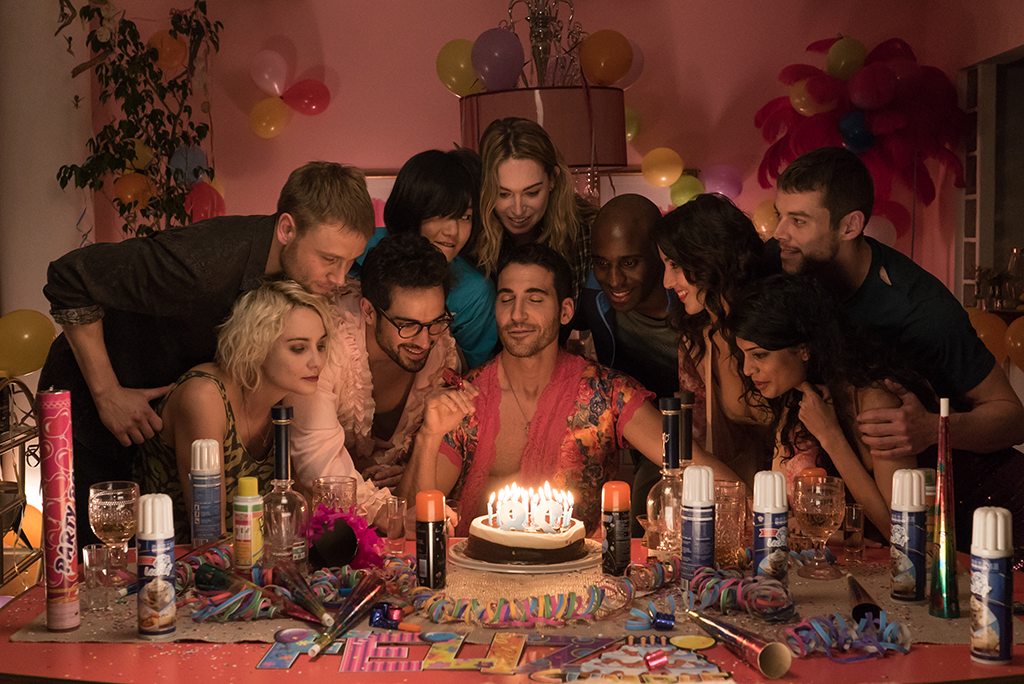 Created, written, and often directed by The Wachowskis of The Matrix fame, Sense8 follows the lives of eight individuals around the world who discover they have a special connection that allows them to peer into each other’s lives, minds, hearts and even bodies. Referred to as a cluster, this empathic link draws together the lives of Capheus (a bus driver in Nairobi), Lito (a closeted gay action film star in Mexico City), Riley (an Icelandic DJ living in London), Nomi (a trans hacktivist in San Francisco), Will (a Chicago cop), Sun (a businesswoman and martial arts expert in Seoul), Wolfgang (a gangster in Berlin) and Kala (pharmacist in Mumbai). Together, they battle supervillain Mr. Whispers, who wants to sever their connection or kill them, whichever comes first, on account of their group power.

The 2-hour Sense8 Christmas special that dropped on December 23, 2016, picks up a few months after where the first season left off. It’s also a beautifully extended teaser of what’s to come when season two begins properly, come spring 2017. When asked why the Wachowski Sisters decided to put out this surprise episode early, in a special message released by Netflix, Lana Wachowski talked about the TV holiday specials of her childhood and how, during Christmas, her life would intersect with those of her beloved characters:

“There’s something about birthdays and holiday celebrations where we notice things about each other. We see how tall kids have grown, and how much our hair has gone grey, #GoPink. Holidays can make you feel so connected in the way that holidays can make you feel so isolated and alone. I wanted to tell a story that was kind of about time, and presence, and how these new lives these characters were experiencing made them feel empowered. Like they can do anything as long as they’re together. And at the same time, has a way of making them feel vulnerable and almost more alone than they’ve ever felt.”

Which is also a perfect way to describe how it feels to watch Sense8, and especially if you’re highly empathic like the characters. There is a profound sense of how we are all linked, our common humanity, but at the same time a deep disconnect with a world and fellow humans who are increasingly hostile and lacking compassion, as we’ve seen in just the few weeks since Donald Trump won the Electoral College.

Sense8 is a veritable diversity and inclusivity bonanza, and will be a useful antidote as the current Nazi and white nationalistic rhetoric grows in response to a changing world that threatens white hetero male privilege. The Wachowskis make it look so easy to have a diverse, three-dimensional cast of different races, cultures, sexualities and genders. It makes me wonder why other showrunners make such a big deal about not doing it. As someone who has lived all over the planet, I’ve never experienced a show before that mirrors my own life and my own empathic connections to others.

The only other show in the history of television that features empathy as a major superpower is Bryan Fuller’s Hannibal, which also found a way to gender-flip and race -flip many well-known characters to marvelous effect. It’s almost as if diversity and empathy go hand in hand.

In the year we’ve known The Wachowskis’ group of sensates — “perceiving or perceived by the senses” — their personal and group struggles have collectively heightened, and the life-or-death stakes have been slowly extending through these eight individuals. During the course of these struggles, which culminate in the climactic Christmas special, one of the major philosophical battles each character faces is negotiating their place within patriarchy and patriarchal norms, and pushing back against these restrictions either to their benefit or detriment.

For the first time on television, we see a transgender woman whose arc isn’t about transitioning, and Nomi (trans actress Jamie Clayton) is literally on the lam from The Man, AKA the government, because of her hacking.

Lito (Miguel Angel Silvestre) was a closeted gay action-movie star from Mexico’s conservative patriarchal culture, until he is maliciously outed by the abusive ex-boyfriend of his best friend Daniela (Eréndira Ibarra). Being outed not on his own terms is costing him his career, his home and the respect of his fans, who expected him to be the macho man he plays on screen, just as they police their own genders.

Newlywed Kala (Tina Desai) is a 35-year-old virgin, and has protected her sexuality fiercely out of fear that she will be judged. Being from a country that recently issued a warning that skirts cause rape, who can blame her? When her husband begins pressuring her for sex, she replies, furious, “We may be married, but my body is mine. It is not a field to be purchased and plowed.” She reminds us that sometimes abstention from sex can be a political act, especially since patriarchy codes women as less-than after they’ve had sex.

Sun (Doona Bae) is in prison because her brother committed fraud, embezzlement and more, running his family’s company into the ground. Being the lesser sibling — a female — she’s asked to take the fall for her family’s honor. When her father has second thoughts and decides to testify in her favor, Sun’s brother has him killed, and tries to have her killed, too. Sun finds out that all the women she’s imprisoned with have also pushed back against the Korean patriarchy — and lost. Her jailmates all killed or hurt the men who were abusing them, and from inside the prison walls, Sun makes the first in-person friends of her life.

As a policeman, Will (Brian J. Smith) should represent the patriarchy, but he too is fighting against it. He demonstrates compassion while on the job, and works hard to not be one of the dick cops we keep hearing about. He’s also dealing with pressures from his abusive and alcoholic father. During the Christmas Special, we find him hiding from the supervillain Whispers (Terrence Mann), the man who would kill the entire cluster for reasons that aren’t quite clear yet.

Capheus (Aml Ameen, who replaces Toby Onwumere) is finding ways to survive in a Nairobi torn by gang violence and warlord agendas. Similarly, Wolfgang (Max Riemelt), in Berlin, is negotiating his legacy as reluctant heir to the most powerful mafia family after he kills its patriarch, and all the gangster “kingdoms” of the city begin rising up. Riley (Tuppence Middleton) is a woman in the music industry who receives her fair share of “she plays good for a girl” comments; during the Christmas special, she’s doing what she does best: nurturing through art and love.

Who would have imagined that there would come a time when demonstrating compassion becomes an actual political act that pushes back on archaic social structures that no longer serve the majority? And how cool is it that a Christmas television special tackles the patriarchy head-on, challenging it on all sides and coming out on top through collective efforts? The coolest.

Ultimately, Sense8 is about the power of connection, both virtual and in person. And more importantly, it’s about people, just like Capheus says when talking about his favorite Christmas movie, It’s A Wonderful Life. Sense8 is about how small kindnesses ripple outward into friendships that become extended family. How a small act of generosity from one person becomes a world-changer for someone else. How, when we pool our skills, talents and gifts, we are fortified as a group. We build networks of safety nets and protection.

Sense8 is the reminder that we are all connected. We need each other. Together we are stronger. Divisions really are superficial, even though they are treated as real and codified as such. We are all human, and every human deserves a shot at love and happiness. If we had more narratives like Sense8 in the world, it might make it easier for some who are disconnected from our common humanity to understand what it’s all about.