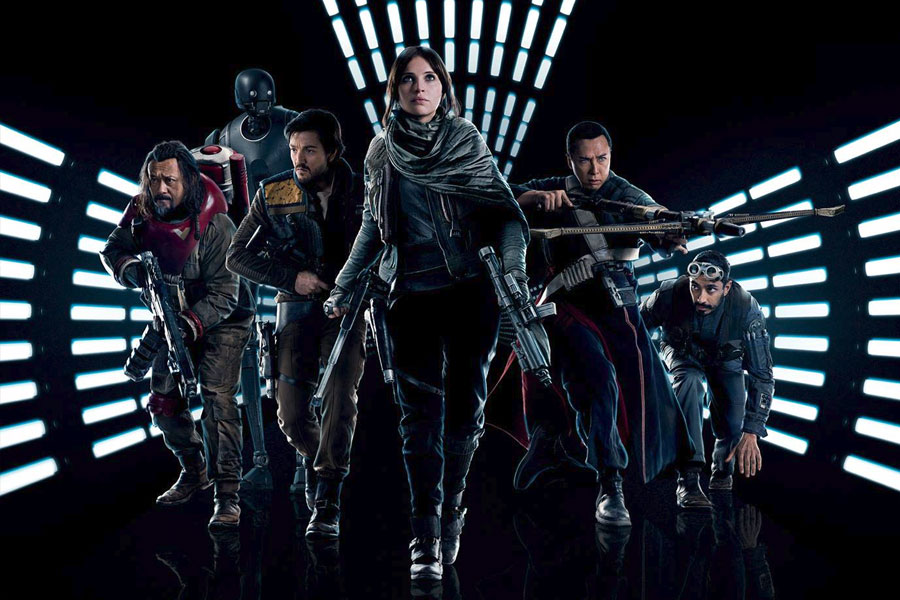 On the day I went to see Rogue One, Donald Trump tweeted, “The United States must greatly strengthen and expand its nuclear capability until such time as the world comes to its senses regarding nukes.” In spite of my best efforts, I couldn’t stop those words from clanging about my head as I watched a movie about the creation of a so-called planet-killer weapon. The metaphor of the Death Star representing nuclear proliferation was just too poignant and terrifying.

When Episodes IV-VI of Star Wars came out in the late ’70s and ’80s, the world was in the middle of the Cold War. Real-life anxiety over nuclear weapons and other weapons of mass destruction bled into the Star Wars universe as the Rebels battled the totalitarian Empire for control of the universe.

Rogue One takes place just before Star Wars Episode IV: A New Hope. The Empire has created the Death Star, but they don’t know that its creator, Galen Erso (Mads Mikkelsen), has built into its core the Death Star’s own destruction. He leaks the information to the Rebel forces, who now include his long-lost daughter Jyn (Felicity Jones) and a diverse, ragtag band of Rebel soldiers who go rogue to capture the Death Star’s design plans. From A New Hope, we already know the Rebels succeed in blowing up the Death Star. What we didn’t see was the story of those who helped make that happen, none of whom survive their feat of heroism.

If Suicide Squad is the perfect garbage movie to describe garbage year 2016, then Rogue One is the perfect film to describe our future under Darth Trump: bleak and apocalyptic. And if Richard Gilmore’s funeral in the new Gilmore Girls episodes was a proxy for all the great people we lost this year — Bowie, Prince, Rickman, Wilder, Cohen and now Carrie Fisher — Rogue One is like re-experiencing each of these tremendous losses in three dimensions.

Unlike our world, in the universe of Rogue One, diplomacy no longer exists. The galaxy is split into the Empire and the Rebels, and all those others who are caught in the crossfire. Watching president-elect Donald Trump undo decades of diplomacy makes Rogue One feel more like horror than science fiction.

The first-ever nuclear weapon test took place in New Mexico on July 16, 1945. Three weeks later, on August 6, 1945, American military forces dropped the first atomic bomb on Hiroshima, Japan, and three days later another on Nagasaki. The devastation was severe and immediate, killing 226,000 people, and there have been repercussions of those acts of war to this day. In the years since, India, Soviet Union, Great Britain, France, China, Iran, North Korea, and Pakistan have all tested nuclear weapons, sparking a number of international treaties to protect the world from mutually assured destruction.

Oddly, the Star Wars timeline corresponds with our own. Sixty-seven years have passed between the rise of the Empire in Star Wars Episode I: The Phantom Menace and Episode VII: The Force Awakens. And, like the people in the Star Wars world, we are still fighting Empire-like forces of fascism, totalitarianism and demagoguery today, including planet-killer weapons of mass destruction. In the west, self-appointed champions of human rights worldwide, like the U.S., U.K. and E.U., are seeing massive upsurges in Nazism and white nationalism, leading to Brexit vote, violence against refugees on the European continent and, of course, the election of kleptocrat-in-chief Donald Trump.

I don’t think there’s been a more relevant movie to our current state of affairs than Rogue One. While feminists are lauding the film for its lack of any sort of romantic storyline and for its kickass female lead, the lack of love also makes the film more bleak and hopeless. In their final moments, Jyn and Cassian Andor (Diego Luna) don’t even share a kiss, that simplest of human connections — especially given the apocalyptic conditions. They had visible chemistry, and if they had lived, I know they would have had an affair. They deserved that last moment together of shared breath. It also would have been the first interracial romance in the Star Wars franchise.

That said, the kiss that never happened only serves to bring home the emotional devastation of the film. Especially for anyone who didn’t know we would only see these amazing characters in one stand-alone story.

Which led me to ask: What was the point of any of it? What did this suicide mission actually accomplish? Between Rogue One and The Force Awakens four decades later, they are all still fighting the same fight. How much more depressing and disheartening can you get?

If the war never ends, then what’s the point? To fight? To keep fighting when nothing changes but the genders and ethnicities of the main characters? Ultimately, there are no winners in war. Everyone becomes a casualty of mass violence; everyone is hurt, diminished, broken in their own ways.

Watching these soon-to-be beloved characters die one by one was like reliving every unexpected loss of 2016. What a shame that none of these amazing actors, from Donnie Yen to Riz Ahmed, can never again appear in a Star Wars film. I do hope the creators keep expanding their new mission of diversity, and extend it to include more gender diversity. A woman headliner is awesome, but yet another white savior narrative isn’t exactly diversity at work. It’s a step in the right direction, but needs to go further.

I do my best not to underestimate the power of art to unsettle everything I’m counting on as true. Rogue One is no exception. This film is a devastating reminder that, in the years to come, many of us in real life will be sacrificed in the battle against neo-fascism, Nazism and white male nationalism. Like the crew of Rogue One, many will never see the fruits of their labor.

My bit of unsolicited advice: Screw your savings and fuck putting off doing the things you want to do. Go on that holiday you’ve always wanted. Have those nice meals you’ve been saving for a special day. Splurge. Donate with abandon. Spend on credit. Do not suffer fools and narcissists. Rid your life of toxic people and abusers. Surround yourself with people who appreciate and love you for all your quirks. Quit your job and do something you love — because with Trump at the helm, our planet is going Titanic and fast. Don’t be Jyn and Cassian and miss out on those kisses. These are the things that make us and keep us human.

If Rogue One can remind us of anything, it’s that all we have is the here and now. We need to be present, even if it feels hopeless — because even if there isn’t hope for us personally, like with the crew of Rogue One, these sacrifices can ultimately become hope for other people. When the future is grim, the only thing left to bank on is hope.