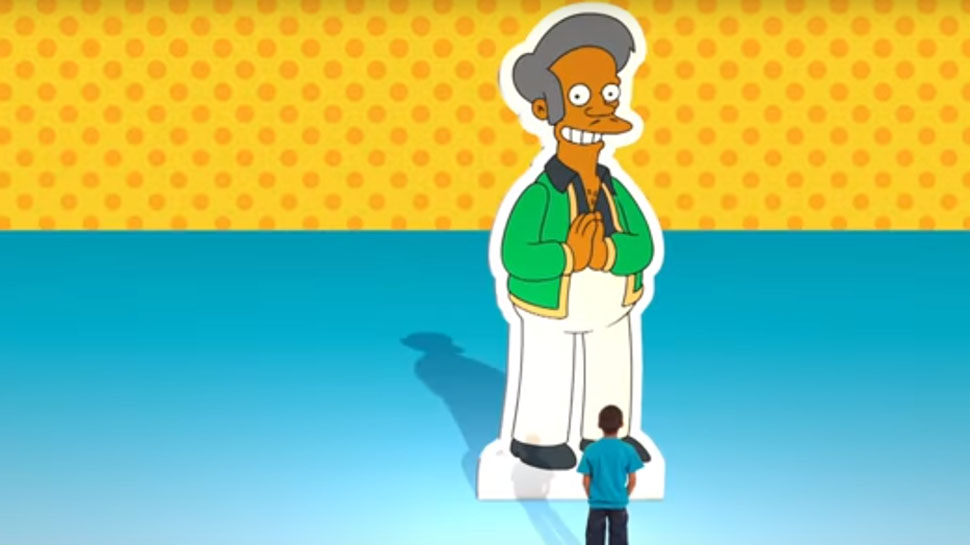 NO MATTER HOW “BELOVED” APU MAY BE, IT’S TIME FOR HIM TO GO.

While I appreciate The Simpsons’ place as iconic in the canons of American pop culture, I have never been a fan. My long list of complaints about The Simpsons includes its sexism, homophobia, Islamophobia, extreme violence, child abuse and more. But one of my biggest reasons is and always will be Kwik-E-Mart clerk Apu.

Over the years when I mention the racist stereotyping inherent in the character, most people have dismissed my concerns, telling me I’m being overly sensitive and asking why can’t I take a joke. Yet, every so often I’d watch a person’s eyes widen with the realization that they had never stopped to think about how an actual South Asian person would perceive Apu’s doofery, which has created widespread distortion of the Desi community that transcended its screen time into real life.

Comedian Hari Kondabolu’s calling out of this racist caricature first in his stand-up routines and now in-depth in his TruTV documentary The Problem With Apu is what made me an instant fan of Kondabolu’s work. And also vindication for what I’ve been saying for decades. It wasn’t just that I was so grateful to see a South Asian comedian representing, but it was also hearing many of my own thoughts about the damage Apu has done to the Desi community echoed through Kondabolu’s own experiences as well as his interviewees. The Problem With Apu gives Kondabolu the opportunity to deepen his analysis as well as bring in some rather shocking back story of the character’s creation to light.

Like, did you know that the ubiquitous line “Thank you, come again” was only said 8 times in the show? And did you know that Apu was never meant to be Indian at all? He was listed in the original script as “Clerk” and it was only during the first table reading that Hank Azaria decided to cobble together one of the most offensive Indian accents to have ever graced a TV screen. Since Azaria made his joke to a room of white dudes, of course everyone laughed and Apu Nahasapeemapetilon was born from a gaggle of assholes to haunt South Asian Americans for the rest of our lives.

When Azaria officially declined an interview for the film saying that he is concerned about putting himself “at the mercy of [Kondabolu’s] edit,” Hari’s response is gold: “He gets to choose how he is portrayed. What a privilege. Hegets to choose how he is seen by other people. How fucking ironic.” Because none of us had a say in how our Desi culture was warped by The Simpsons portrayal, and even today Apu shapes how we are perceived by mainstream America.

But even without the elusive Azaria interview, found footage in The Problem With Apu reveals not only is Hank Azaria a grade A turd, he is also utterly remorseless about these racist choices he has made and continues to make for almost three decades. The clips Kondabolu presents demonstrate Azaria is well aware and open about the fact that the accent is offensive and racist, and he has normalized it to such an extent that he even opened a convocation speech at Tufts with Apu’s voice.

Kondabolu’s interview with The Simpsons writer Dana Gould is equally revealing. It was almost funny watching Gould dance around the question of Apu’s racist portrayal with elaborate justifications and excuses, even going so far as to push back on Kondabolu with false equivalencies evident in other characters like Mr. Burns. Kondabolu points out that virtually every other character and stereotype in the show comes with a human flaw, but Apu’s only flaw is that he talks funny. Gould ultimately boils these creative choices down to this: “There are accents that just sound funny to white Americans. Period.” Thanks for the spike in my blood pressure, Mr. Gould!

Kondabolu also sits down with Whoopi Goldberg to talk about the long and offensive tradition of minstrelsy in American visual media—from the phenomenon of blackface to her “Negrobilia” collection—and they both conclude that Apu is the newest iteration of this all-American racist tradition. It’s mind boggling that in 2017 the only people on the same page about these issues of representation and presentation seem to be people of color attempting to have some say in how we are portrayed on-screen.

Utkarsh Ambudkar makes an excellent point in the film about how Apu has caused legitimate psychological and emotional problems for many South Asians. We’ve been bullied because of him, people make assumptions about us because of him, and South Asian clerks in real life receive all levels of racist verbal abuse on a daily basis all because of a badly drawn cartoon character.

In a series of nuanced interviews with other Desi creators such as Aasif Maandvi, Aziz Ansari, Aparna Nancherla, Shilpa Shetty, Mallika Rao, Kal Penn, and many more, Kondabolu navigates the tricky territories of cultural appropriation, racism, and its intersection with representation in The Simpsons and beyond. Many Desi’s biggest problem with Apu is that for so many years he was the only South Asian on television at all. And this is the fact that shaped white America’s perception of South Asians, as well as delineating just where we stand as Desi Americans within mainstream culture.

It was heartbreaking to hear about the hard choices so many South Asian creatives had to make in order to get their feet in the show business doors and make these new trails for the next generation to follow, hopefully without being asked to put on an offensive accent or having to choose promoting a racist stereotype.

While there has certainly been a shift in awareness of Desi issues and more representation for brown faces on-screen these past few years that has essentially paved the way for Kondabolu’s film to reach a critical mass audience, we still have a long way to go. More importantly, how do we begin to undo the damage that the Apu stereotype has caused for millions of Desis not just in America, but around the world? And if it’s generally accepted that blackface is inappropriate and racist, then why the hell is Apu still a thing?

“Stereotypes have a long shelf-life,” former Surgeon General Vivek Murthy tells Kondabolu, and this is why representation has become such a key issue in modern media. The problem with long-running and unapologetic stereotypes like Apu is that by now it is virtually impossible to dismantle it, unless more South Asians get behind and in front of cameras to lead by example.

Kondabolu does a brilliant job in unpacking all the nuanced problems with Apu, and somehow the documentary also ends up being really funny in spite of its rage-inducing content. The undercurrent of righteous anger running through the film is also socially relevant, since many South Asians feel forced to swallow the pain of racism and pretend it isn’t as big a deal as it is. This movie should be required viewing, and for fans of The Simpsons in particular. No matter how “beloved” Apu may be, it’s time for him to go.