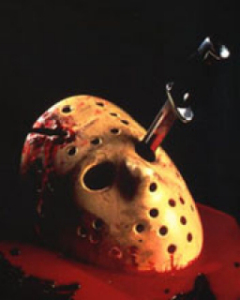 This piece originally appeared at my favorite horror site Anything Horror, Feb. 2011.

During college football season my husband gets Hurricane fever and hijacks my computer, forcing my return to the antiquated media of DVDs in order to get my viewing kicks. After almost five years of marriage, it’s our autumn ritual: he screaming at the football players, me screaming at scary movies. One night our DVD rental place had effectively nothing new, so I went to the well-loved “Teror” (I live in the Czech Republic) section to see what I could find. All bright and shiny, she had odd numbers of the FRIDAY THE 13TH films (1, 3, 6, 8) and so I, scoffing, grudgingly picked up the first film and rented it.

FRIDAY THE 13TH is one of those iconic films that everyone thinks they’ve seen, and I was no exception, especially in the context of my self-titled Scream Queen status. As I started watching the first one I came to a horrible realization about myself, one that I thought I would never admit to anyone — I had never seen the first FRIDAY THE 13TH.

For shame! All these years calling myself a horror fan, fanatic even, and I had never seen this absolute classic. “You can’t tell ANYONE!” I made my husband promise. How could this have happened?! My novel American Monsters even has a character based on Jason Voorhees! How could I not have seen these films!? 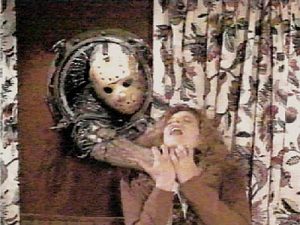 So, to make up for this massive oversight on my part, I decided that I would watch the entire series from start to finish. All 12 films, including the remake and Freddy Vs Jason, which turned out to be the only films of the series I had actually seen. Bad Sezin! Bad!

What I found was a goldmine of awesome.

Okay, the acting not so much, but the entire story arc of Jason, his mother, the copycat killer and then finally the resurrection of Jason in the sixth film was incredible and, oddly enough, believable within the narrative of Jason Voorhees’s world. Harry Manfredini’s musical score is one of the most effective soundtracks I have ever heard on any film and was so strong it was able to carry the suspense through each of the eight films he worked on in spite of the terrible performances. And in fact, the more I got into the films, the less I cared about the acting at all, which never happens to me; I’m someone who will turn off a scary movie if the acting is bad. Zero tolerance. But not for Jason. I was captivated.

What also struck me was how, in spite of being a pioneer in the slasher horror genre, these films don’t fit in with many the stereotypes we heard about in the SCREAM films. First of all, everybody dies. Jason, et al, are not discerning murderers. Doesn’t matter if you are a slut, virgin, geek, mom, handicapped, divorcee, you’re gonna die if Jason is around. This idea that sex equals death is theoretically interesting, but it’s a very selective view of what actually happens in these films. Many times it’s the nerd who dies first, not the ones all naked, enjoying their sexy-time fun.

Secondly, there was not a single film where the black guy or Asian girl dies first. Wherever that idea came from in horror films, it was definitively NOT the FRIDAY THE 13TH series. This is one of the things that I found most groundbreaking about the social commentary present here. That’s not to say they don’t eventually die, but Jason et al are equal opportunity killers.

Thirdly, the music! Did I mention how incredible the music is? Every time I heard the opening chords, the “Ki ki ki ki ma ma ma ma”, ooh shiver me tingles! That just two notes can invoke such anticipation, dread and fear. Incredible. Harry Manfredini is a genius and he totally carried the films he worked on. It’s really a shame they couldn’t get him for films 8 and 9, it would have made a world of difference.

While I do love horror films for the pure scare factor, I also lean towards looking at the greater societal issues evident and especially in terms of violence against women. My university thesis (later becoming the novel American Monsters) explored the southern California rave scene through the lens of horror and so I’ve become well-versed in theories of the male gaze as well as portrayals of the female body on film. My favourite FRIDAY THE 13TH films all fit into this discourse, and interestingly enough all feature very strong female characters/survivors, with some fascinating results. 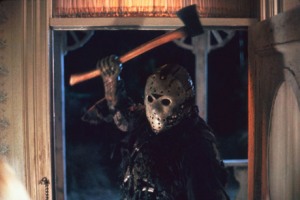 FRIDAY THE 13TH: The heroine/survivor is not only sexually active, but she is having an affair with a married man. Take that, SCREAM rules! The killer turns out to be a woman, which, in the context of 1970s slasher films, never before happened. Not just any killer, a mother! A monstrous mother. Oh hell yeah! 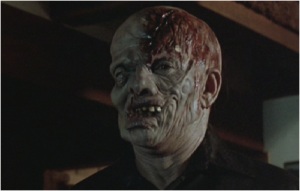 FRIDAY THE 13TH VII: THE NEW BLOOD: A telekinetic girl who kills her abusive father?! Oh SNAP! This fits in with so much of the horror theory that I know and love, and is an offshoot of the rape revenge films which tend towards being my theoretical favourites. The fight scene between Tina and Jason is fucking epic. And Tina is no angel herself. She kisses a boy she just met, one who admits to having been in prison and who is much older than her. You go, girl!

FRIDAY THE 13TH IX: JASON GOES TO HELL: Jason had a sister? Who knew?! And the only way to send Jason to hell for good is a mystical knife wielded by a blood relative?! Most excellent! I also love how Jason is a disembodied spirit who must possess human bodies in order to slash his way through town. The only way to know if it’s Jason is by seeing his reflection. Too cool. The legend says that Jason can re-incorporate through the body of a Voorhees woman. Will he? My favourite part was when the tadpole-like primal essence of Jason is puked up and slithers into the vagina of his dead sister, bringing him back into his own body. The monstrous mother and monstrous birth were never more evident in that moment. 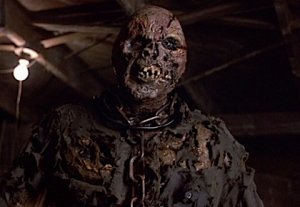 FREDDY VS. JASON: What I love about this film is that by the end, you actually root for Jason. I mean, come on. A pervert child molester/murderer vs. an undiscerning serial killer? No contest. The fight scene between Freddy and Jason was epic in the same way the Tina vs Jason kicked some serious ass. The hybrid score of the FRIDAY THE 13TH coda melded with the NIGHTMARE ON ELM STREET playground-like riffs was phenomenal. Plus, it was nice to see some “good” acting for once.

First honorary mention: FRIDAY THE 13TH: A NEW BEGINNING (#6) — The actor who plays a traumatized Tommy Jarvis is badass. His eyes are so haunted and he looks exactly what I think a little boy forced to kill someone in order to save himself and his sister would look like years later. I also love that Jason really is dead and it’s a copycat killer, although poor Tommy doesn’t know it and struggles with what he thinks is madness. The ending of this film haunted me, and I really wished they had continued with the planted seed that Tommy might end up becoming the next copycat. Oh well. 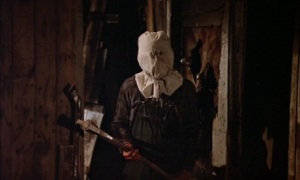 Second honorary mention: FRIDAY THE 13TH (2009) — Marcus Dunstan did an excellent job of weaving many of the plot points from the original films into this one. Like the brother looking for his sister, death by sleeping bag, rich kid’s weekend at the lake. The shrine to Pamela Voorhees resurfaces and the marijuana themes emerge with a vengeance. Steve Jablonsky’s musical score was a phenomenal twist on Manfredini’s: He changed the urgency of “Ki ki ki ki ma ma ma ma” into a throbbing “Kiii ma ma Kii ma ma”, bringing a new intensity to this very modern version of the tale. Watching the series in order, I also don’t think of this one as a remake, I think of it as another installment in the tale of Jason, which just makes me happy. I love never ending, epic tales, so I do. 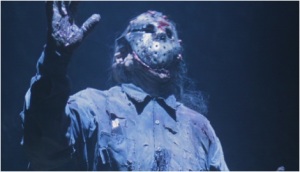 Thus ends my two-month love affair with Jason Voorhees and his nutty world. I’ve got to admit, I miss the dude, and I hope they’ll make a new one.